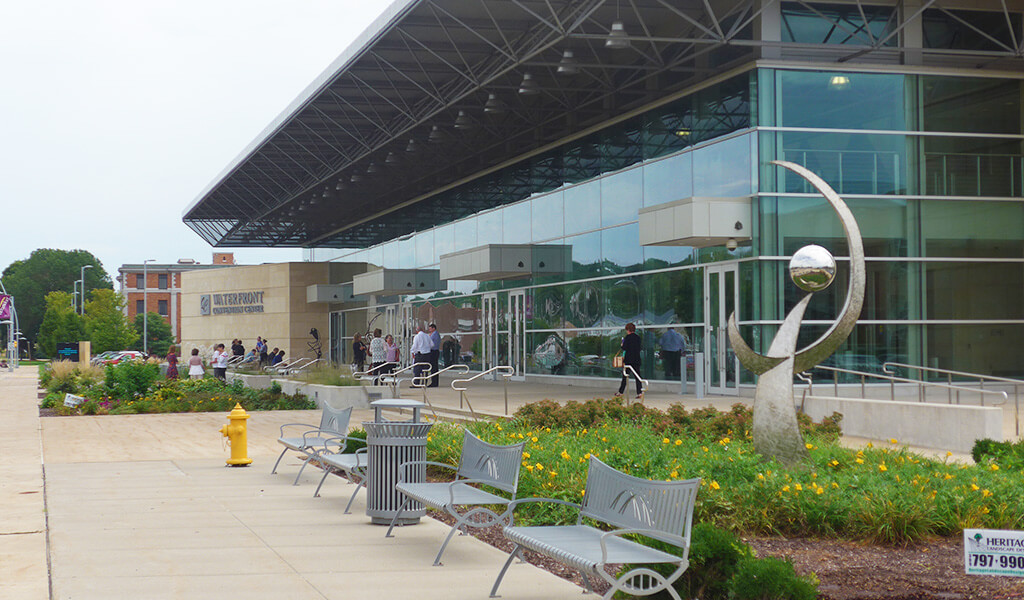 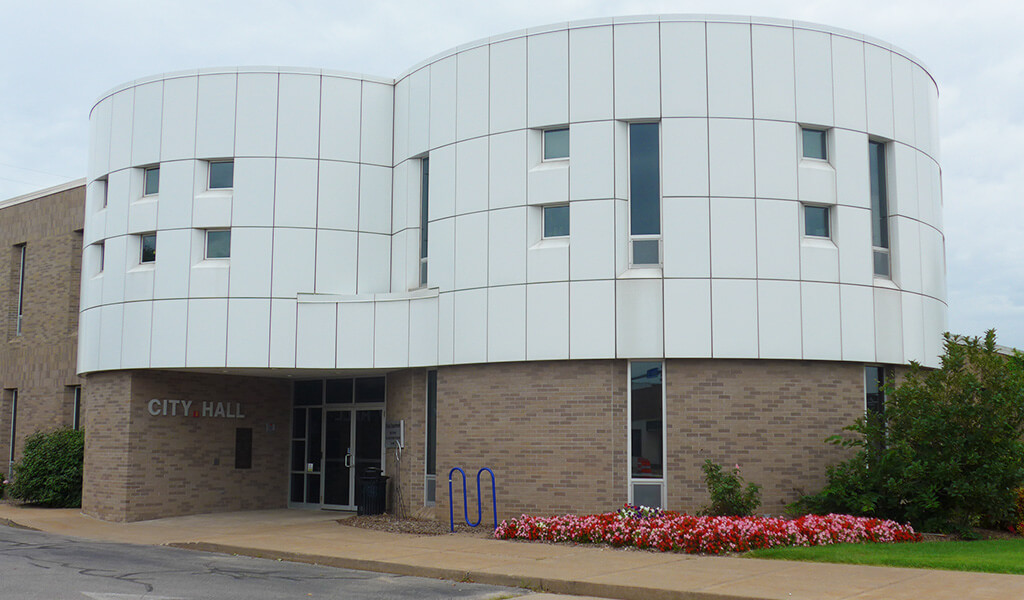 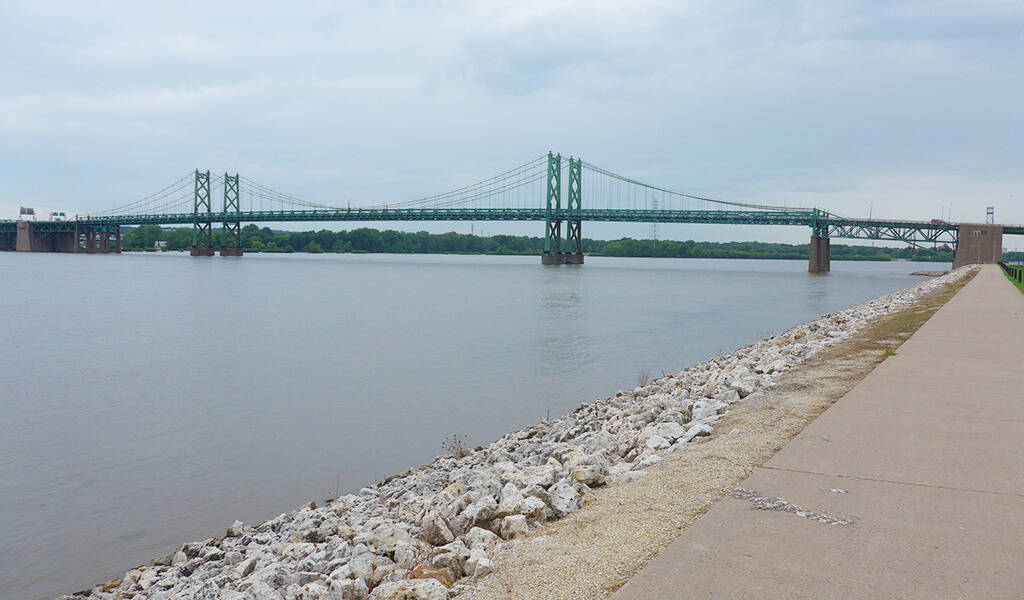 Interstate 74 Bridge over the Mississippi River
The I-74 bridge is a primary conduit to travelers arriving in the City of Bettendorf. 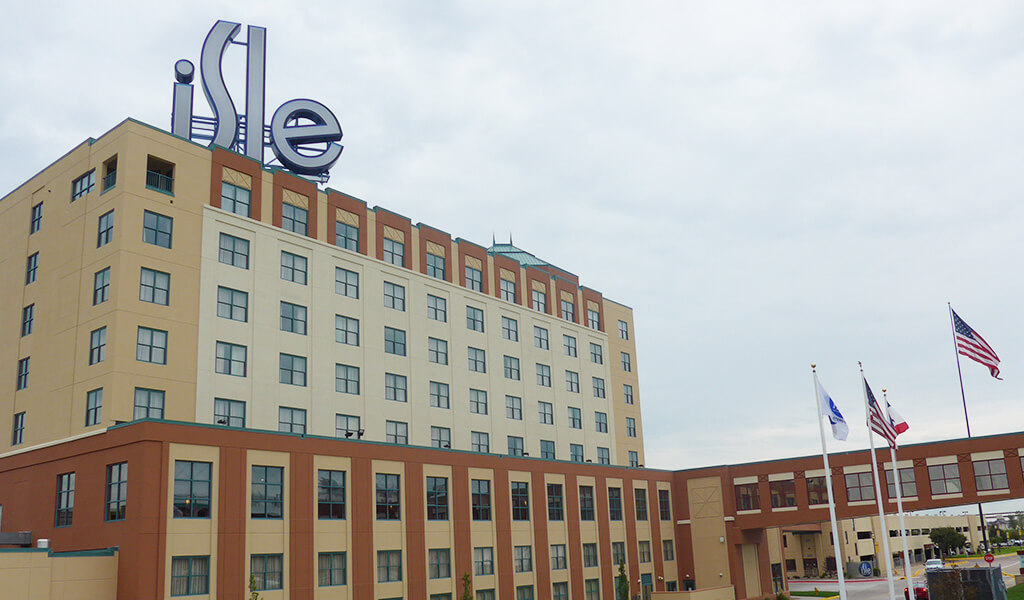 During the first half of the 20th century, the Bettendorf riverfront had a thriving downtown retail district that served as the destination shopping area for citizens of the community. However, in the 1960s and into the 1980s, large shopping centers and malls started opening on the north side of town, as well as along the easily-accessible Kimberly Road corridor in Davenport. These new businesses generated a shift in shopping preference, leading to a steady decline in downtown business district activity. The farm crisis in the 1980s led to an appreciable decline in the area’s population, which in turn impaired the prosperity of the downtown region even further. 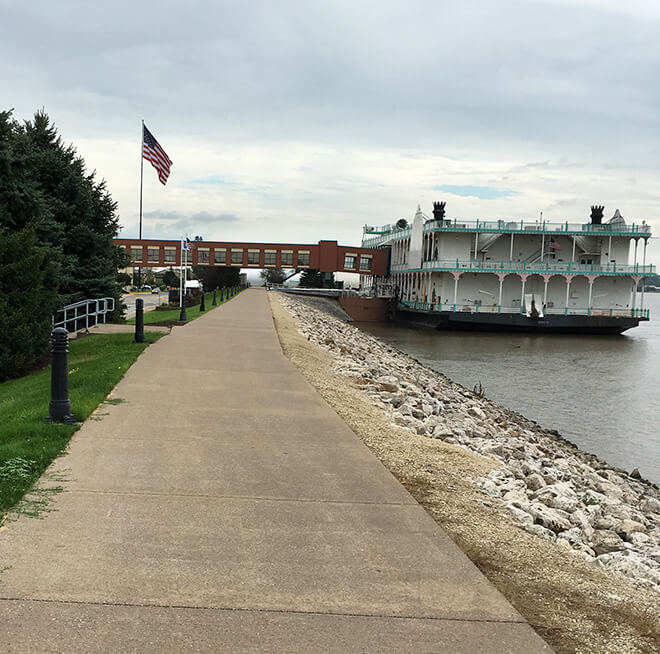 The legalization of riverboat gambling in the early 90s brought renewed interest to the waterfront area.

However, a renewed interest in the downtown region started taking shape in the early 1990s with the introduction of riverboat gambling on the Bettendorf waterfront. Spurred by this development, more entertainment venues and restaurants began relocating to the downtown area. Unfortunately, the layout of the downtown street network (between 15th Street and 26th Street) wasn’t conducive for the revitalization effort to meet its full potential. The City of Bettendorf partnered with Snyder & Associates to create an improved transportation plan that efficiently facilitates through traffic while also assigning local traffic to a dedicated roadway serving the downtown area. Another focus of the partnership was to further support the recent plans to replace the Interstate 74 Mississippi River bridge adjacent to the study area.

Before beginning any corridor planning work, Snyder & Associates oversaw the administration of a thorough market analysis. This analysis provided a fact-based look at the existing business conditions in the greater Quad Cities area. It also produced insight into the types of businesses that would be needed in downtown Bettendorf to create the proper balance for becoming a shopping and entertainment destination with a unique character. Part of this insight was identifying redevelopment opportunities for a downtown area containing aging infrastructure and buildings.

It also identified five distinct land-use areas that would be needed to harmonize the downtown business environment. These districts would be the drivers for the recommended roadway configurations in the study corridors and include an:

With the market analysis complete, a traffic feasibility study was initiated. The feasibility study included the review and evaluation of impacts associated with converting the US Highway 67 one-way couplet (locally known as Grant and State Streets), to two-way roadways through the downtown area. The goal was to separate the regional traffic moving along Grant Street from the destination traffic that would use State Street to the south.

The traffic analysis portion of the study included an evaluation to determine the redistribution of traffic if the corridors were separated. The study concluded that converting State Street into a low-speed, two-way roadway with on-street parking would provide better access to the businesses located between 15th Street and 26th Street, while at the same time creating a more pedestrian-friendly environment. Grant Street to the north would continue to carry the heavier, US 67 traffic as a two-way, highway thoroughfare. Coordination with the Iowa DOT would also be necessary regarding the potential transfer of jurisdiction of State Street to the city.

Another goal of the study was to find a way to provide better connectivity from downtown to the riverfront. Currently, the Canadian Pacific Railroad tracks run parallel to State Street to the south and divide the two districts. A single overpass at 17th Street is the only grade-separated crossing that provides uninterrupted access to venues south of the tracks, including the casino, regional trail system, and the riverfront. Locating another access to the riverfront would link a network of entertainment destinations and services to help attract visitors and residents.

An undertaking of this scale requires an extensive amount of coordination between local and state agencies, area business owners, and the public at large. The Snyder & Associates team was able to bring these various groups to the table to solicit input and ideas through numerous public meetings. They also observed, documented, and evaluated existing conditions, along with the traffic operations throughout the downtown.

With the project goals established, numerous roadway alternatives were developed to separate US 67 into two, independent roads. For Grant Street, which is proposed to maintain the US 67 designation, three options were created for realignment. Each option looked to maximize existing right-of-way and create a safe corridor where access control was defined through the use of medians. These options also took into consideration the existence of dilapidated buildings and older infrastructure in the corridor area that was slated for potential redevelopment.

The State Street options looked at reconfiguring both ends of the corridor where they connect with Grant Street. The goal of these changes was to support siphoning local traffic from Grant Street in order to better facilitate pedestrian and vehicle mobility in the downtown business district. Different intersection treatments, including mini-roundabouts and stop-controlled intersections, were evaluated for the State Street corridor. Three-lane and two-lane options with on-street parking and multi-modal accommodations were also considered for the corridor. Several alternatives were developed to delineate the five separate land-use districts throughout the entire downtown area. 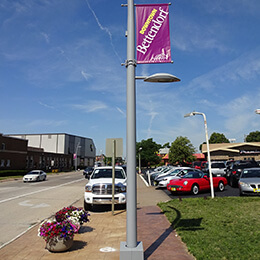 Streetscape enhancements along the corridor create a sense of place.

Gateway and streetscape enhancements for both roadways were incorporated into the concept designs. These included unique signage or architectural features to mark the transition to the newly created downtown corridor. Other treatment options included seating and benches, as well as decorative lighting and bicycle racks. The parking study indicated an additional need for on-street and off-street parking. This finding led to a redevelopment concept for future revitalization efforts.

Finally, an overpass on 23rd Street was suggested as a means to provide another grade-separated access to the riverfront. This overpass would connect with a new access road leading to the riverfront casino and hotel area. It would also open up the possibility of land redevelopment to the east of the casino.

As a result of the study, several short and long-term strategies were identified to help funding efforts on this project. Among them was the recommendation to implement a Self-Supported Municipal Improvement District (SSMID). SSMID funds would be used for the maintenance of public spaces, marketing and promotion of the downtown district, and capital improvements. Additionally, it was suggested that application processes should begin for state and local funding sources. These programs generally require well-developed planning initiatives and matching funds. The establishment of these planning documents and match dollars as soon as possible assists the city in positioning Bettendorf into upcoming funding streams, which may take years to mature.