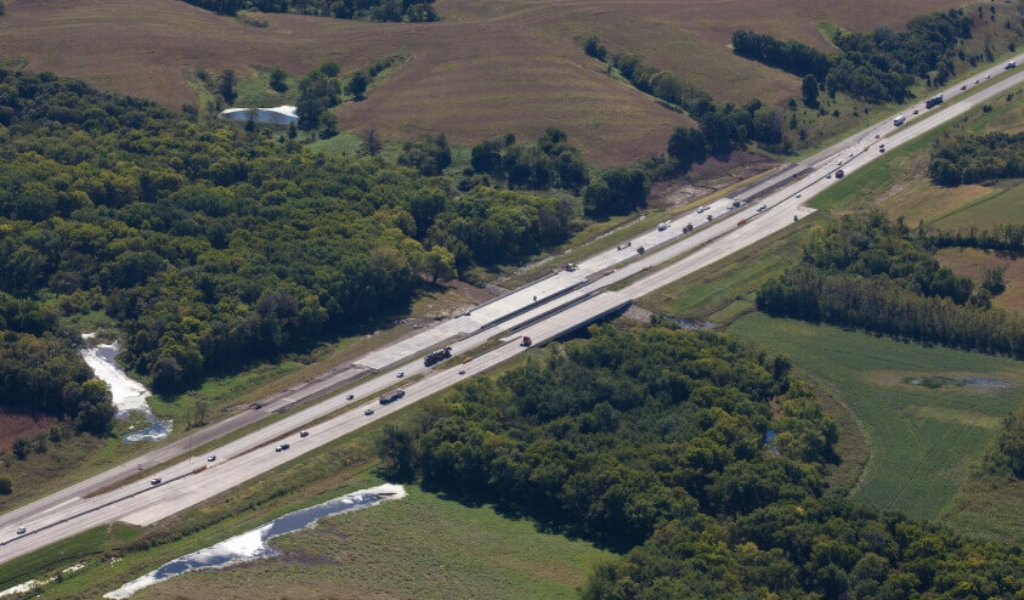 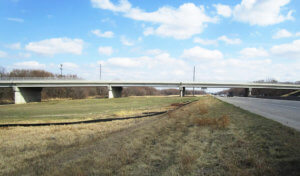 As part of an on-call design contract, the Iowa Department of Transportation (DOT) tapped Snyder & Associates to complete the final roadway design work for multiple construction contracts on Interstate 35 spanning Polk and Warren Counties. The design covers I-35 beginning south of the Iowa Highway 92 Interchange and extends over 16 miles to the I-35/80/235 Interchange (regionally known as the West Mixmaster) in West Des Moines.

The project included extensive grading and paving work near the Iowa 92 interchange, as well as the design and paving of the roadway approaches to the new northbound and southbound bridges spanning the North River and Badger Creek. In addition, the northbound lanes of I-35 were reconstructed from the Polk/Warren County line to the West Mixmaster.

Initially constructed in 1958, the existing pavement in the project area was some of the oldest in Iowa’s Interstate system and required costly ongoing maintenance. In addition to the poor pavement conditions, specific areas to be addressed were:

Our team also developed 3-D machine control files. These files were made available to contractors in order to use Automated Machine Guidance (AMG). AMG is a process whereby construction equipment utilizes onboard computers and global positioning system (GPS) technology for horizontal and vertical guidance in real-time.

For certain types of grading work, AMG has the potential to achieve designed grades on the first pass. This results in fewer budgetary impacts and shorter construction timeframes. Other benefits of using AMG include improved quality, better safety for construction workers compared to traditional staking, and more efficient use of already limited resources.

Prior to Snyder & Associates completing the final project design, the cost of all programmed projects was estimated at less than $100 million. However, because there were projects in the original environmental assessment that had not yet been programmed, that cost was expected to increase. Once all projects were added, the estimated cost exceeded $140 million. Because federal funds were being used for the project, a financial plan reviewed by the Federal Highway Administration (FHWA) was required. This requirement pertains to all projects with an estimated cost between $100 million and $500 million. Snyder & Associates navigated this complex financial planning process for the client in consultation with the FHWA.

The purpose of a financial plan is to ensure financial resources for large projects are identified, available, and properly managed during the life of the project. It’s a comprehensive document designed to reflect the project scope, schedule, cost, and funding. The plan goes far beyond the typical cost estimates prepared by engineers. Progress is tracked over time through annual updates to the initial financial plan. Each annual update reviews and tracks actual dollars spent on each project and anticipated changes to overall project costs over the past fiscal year. This helps to determine if changes to project programming are needed.

While it’s typically only done for large, complex projects, this type of detailed financial planning strategy is useful for smaller projects, as well. Although the financial plan for a small project is less complicated, it’s equally important to track all aspects of the project cost, changes that occur, and anticipated funding sources. In the event of a funding shortfall, Snyder & Associates can assist with the identification of potential funding sources and the preparation of required applications.

Snyder & Associates completed both the final roadway design and financial plan for the reconstruction of Interstate 35 while overcoming several challenges along the way. Snyder & Associates’ flexibility and commitment to doing what is necessary to ensure the success of a project is the foundation of our firm’s dedication to our customers.