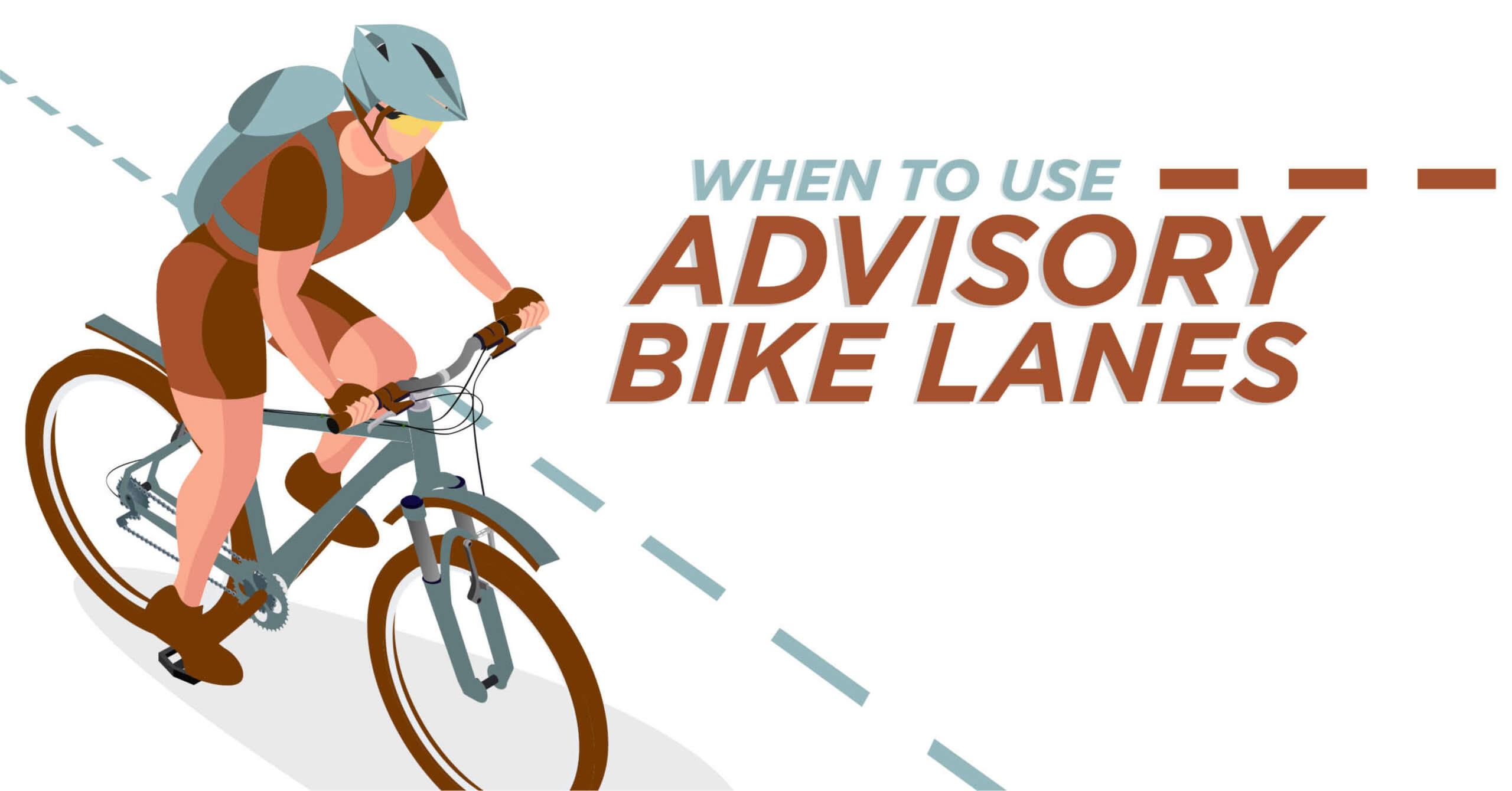 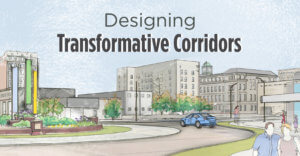 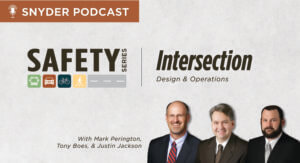 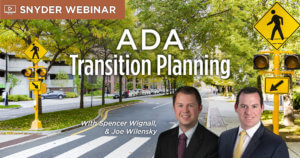 What are Advisory Bike Lanes?

This facility type creates a shared-roadway experience requiring vehicles to merge and yield to one another. Drivers position their vehicles in the center lane and carefully merge into the right bike lane to pass oncoming vehicles. The drivers must yield to people biking before merging to the right.

A typical county highway consists of 66 feet of right-of-way (extending from ditch to ditch). One option to better accommodate people biking and walking is to enclose the ditch and build a sidepath trail. However, this can be a rather costly alternative. Additionally, if the county highway has a gravel surface, dust and rock interfere with the ability to use this type of trail.

Limitations like these are why advisory bike lanes can be a better solution in a rural setting. Imagine you’re driving down a gravel road with your vehicle positioned near the middle of the roadway. Now imagine another car is coming towards you. What do you do? You simply slow down and move to the right, giving the passing driver a country wave and a head nod. Advisory bike lanes suggest that you’d continue to drive in this cautious and friendly manner. The only difference is that the road would be paved and there may be people biking and walking in their designated lanes. 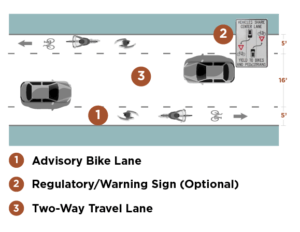 Where should advisory bike lanes be used?

Advisory bike lanes are envisioned to be implemented on low-volume, low-speed, two-lane roads. Ideally, this would be the type of road where the traffic is so low that bicyclists dominate the traffic mix. In rural Iowa, some roads don’t reach the DOT’s minimum traffic count of 50 vehicles per day, while regional trail networks can see upwards of 3,000 users per day. Vast rural road networks provide many opportunities to improve trail connectivity through advisory bike lanes by closing the gap between trail segments. In urban settings, advisory bike lanes can also be used on roadways that are bike dominant and serve as connections to trails or other public improvements.

Boone County Engineering received a RISE (Revitalize Iowa’s Sound Economy) grant to partially fund the paving of QF Lane (currently a gravel road) mentioned at the end of this article. This road is low-volume, low-speed, and situated in a rural residential setting. Paving will provide the opportunity to share the roadway with people biking and walking.

What are the benefits and concerns of advisory bike lane use?

As with any transportation facility, there are a variety of benefits and concerns to weigh before experimenting with advisory bike lanes.

Benefits of advisory bike lanes include:

The concerns of advisory bike lanes include:

Advisory bike lanes can accommodate pedestrians through additional consideration and attention to foster safety and accessibility for all — most notably, making sure that advisory bike lanes follow ADA standards. If pedestrians are permitted, Tactile Walking Surface Indicators (TWSI) should be installed where needed to communicate route and potential conflicts, such as street crossings, to people with visual impairments. Additionally, the cross slope along the advisory bike lane should be under two percent to ease travel for people with mobility impairments. Roadway cross slopes on rural and low-volume roadways often exceed two percent, particularly closer to the shoulder; therefore, modifications may be needed for full compliance.

Why can’t we just use shared lane markings in these situations? 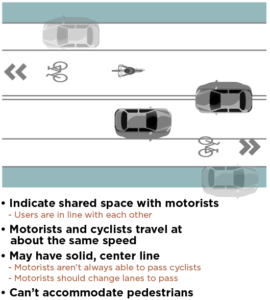 While shared lane markings are often used to overcome similar challenges (narrow or constrained roadways and the need for connections between other facilities), the two facility types overcome these challenges in different ways.

The potential for a solid center line along a shared lane route means motorists aren’t always able to pass bicyclists. If a dashed center line is present, changing lanes is necessary to pass. Advisory bike lanes allow motorists to easily pass people biking by simply yielding to oncoming traffic. Last but not least, shared lane markings can’t accommodate pedestrians, while advisory bike lanes can with only minor special considerations. While a sidewalk would be preferred, the advisory bike lane can meet this need where that’s not an option.

While still in the experimentation phase, advisory bike lanes are quickly catching on in many communities. The opportunity to convert under-utilized roadways to accommodate several modes of transportation is appealing to recreationists and community leaders alike. Look for further advisory bike lane experimentation efforts to gain traction as communities begin to realize the benefits of this unique transportation facility. 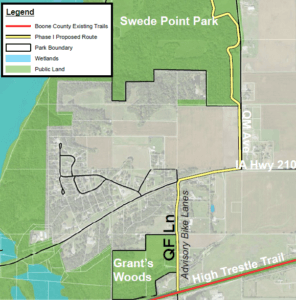 During the summer of 2020, Snyder & Associates will be working with Boone County to implement advisory bike lanes on a portion of QF Lane between the High Trestle Trail and Highway 210, west of Madrid. This location will eventually link to a future trail connection to Swede Point Park. At this time, advisory bike lanes are not part of the Manual on Uniform Traffic Control Devices (MUTCD) published by the Federal Highway Administration (FHWA). To implement an advisory bike lane, a jurisdiction must apply for “experimental status” through the FHWA.

During the two-year trial period, semiannual reports, usage counts, and monitoring are required to gauge how the facility is performing. Public surveys will also be administered to supplement the field data. Following the trial period, a final evaluation will be done before the FHWA renders approval to continue utilizing the advisory bike lanes.