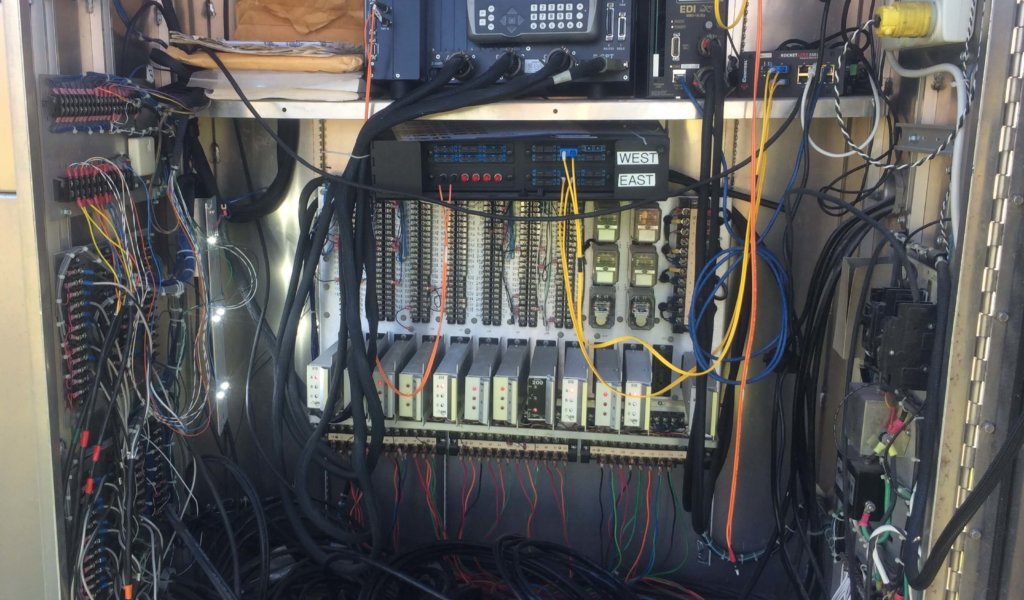 Inside of Signal Control Cabinet
A thorough inventory of controller cabinets was taken to aid in the decision process. 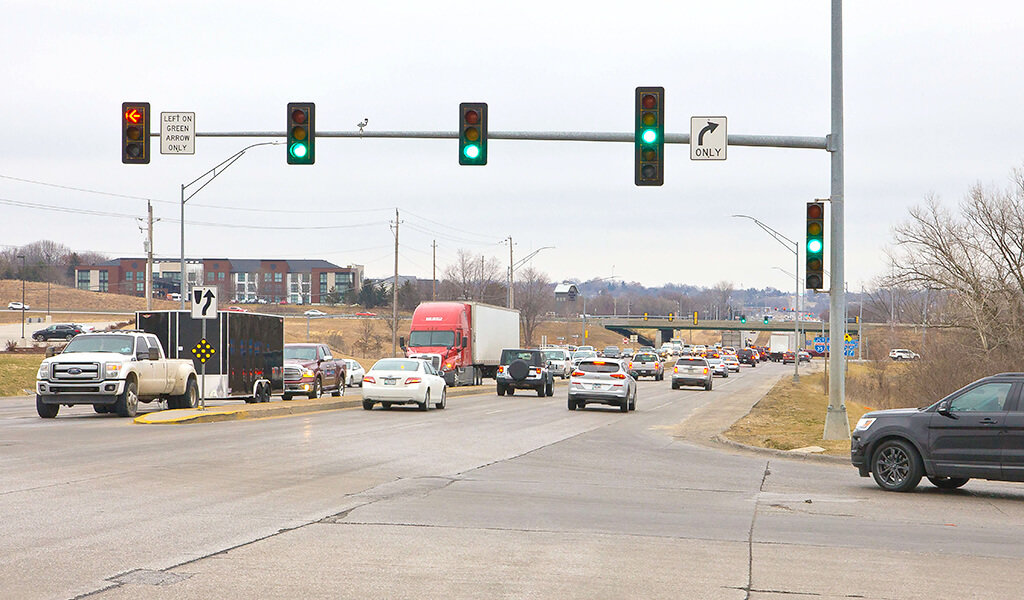 With a long history of providing valuable engineering services to communities along the Highway 6 corridor through Clive and Urbandale, Iowa, Snyder & Associates is spearheading the process to implement Adaptive Signal Control Technology (ASCT) at 15 intersections in this busy and congested area. This project includes intersections extending from NW 156th Street in Clive to 70th Street in Urbandale/Windsor Heights.

The existing traffic signal system along this corridor is not capable of accommodating short-term changes in traffic demand automatically without manual adjustments. ASCT, however, uses multiple detection methods to gather real-time traffic information and monitors the performance levels along an entire corridor. This information is quickly evaluated and signal timing improvements are developed by an algorithm. The ASCT implements the updates continually, sharing information between signals to adjust the system’s timing. These constant adjustments accommodate traffic patterns that are different from the peak periods (during which the standard signals were designed to operate) and help keep traffic flowing smoothly.

To determine if ASCT was necessary for this corridor, a systems engineering study was conducted by the Snyder & Associates team. A systems engineering study is a meticulous process that follows guidelines established by the Federal Highway Administration (FHWA). This type of study is also a requirement of most state DOTs to be eligible for grant and other program funding.

Because there are numerous adaptive control systems available, it’s critical to know the existing conditions of a corridor before issuing a Request for Proposals (RFP). To that end, a systems engineering study looks at peak/off-peak traffic conditions and studies turning movement counts along the corridor. The engineering team also inventoried the current signal controller equipment in use, the communications network in the area, and any geometric concerns that may need to be addressed at individual intersections.

Additionally, other improvements to modify signal controller cabinet equipment or update the communication network are considered. Fortunately, all of the intersections in the study group already have relatively modern controller cabinets, signal controller hardware, and a strong fiber optic network from prior traffic signal system projects. Fiber optic connectivity is a strong necessity for most ASCT installations to provide the level of communication necessary for optimal performance.

Operational Considerations to be addressed by ASCT

There are several challenges and operational considerations along the Highway 6 corridor that the ASCT system would need to address, including:

Another unique aspect for this study and ASCT implementation project was the need to coordinate between multiple agencies and jurisdictions. The City of Clive owns and maintains one signalized intersection (NW 156th Street) without support from other agencies. The City of Clive also maintains the 11 traffic signals from NW 142nd Street to NW 82nd Street. However, they fiscally share them with the City of Urbandale. Additionally, the City of Urbandale maintains three signalized intersections (from 78th Street to 70th Street) and fiscally shares them with the City of Windsor Heights. The Snyder & Associates team was able to successfully navigate this complex system with various stakeholders.

The business and residential growth along the corridor has been the main driver to add ASCT. Implementation of this system will result in fewer delays due to congested traffic, reduced fuel consumption, and fewer frustrated drivers. For the traveling public, the improvements will provide numerous other benefits, including:

Our firm also assisted the Cities of Clive and Urbandale in obtaining Iowa Clean Air Attainment Program (ICAAP) and Urban-State Traffic Engineering Program (U-STEP) funding to assist in paying for the study and the ASCT system. Additionally, our team wrote the RFP (Request for Proposals) and played an integral role in scoring the submitted proposals and making the final vendor selection.

Snyder & Associates is proud to have worked with the communities along this heavily traveled corridor for more than a quarter of a century. The deployment of an ASCT system is one more step toward providing adaptive, as well as coordination capabilities that allow the affected communities to proactively manage traffic, enhance operations, increase mobility, and reduce congestion.