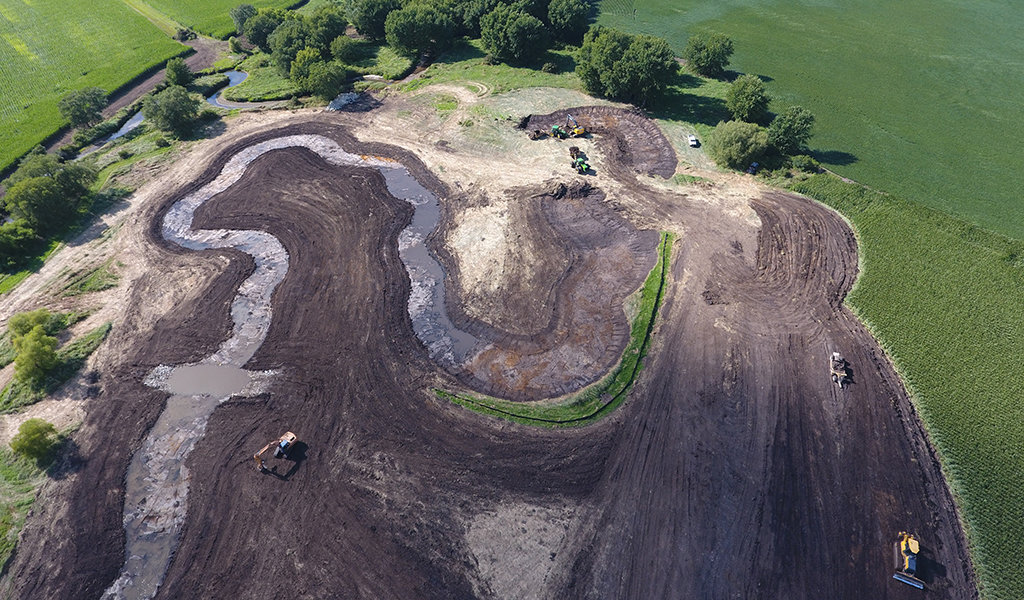 Stream Re-Meandering
A new stream alignment was created to restore a meandering channel and maximize stream credit potential for the Sponsor. 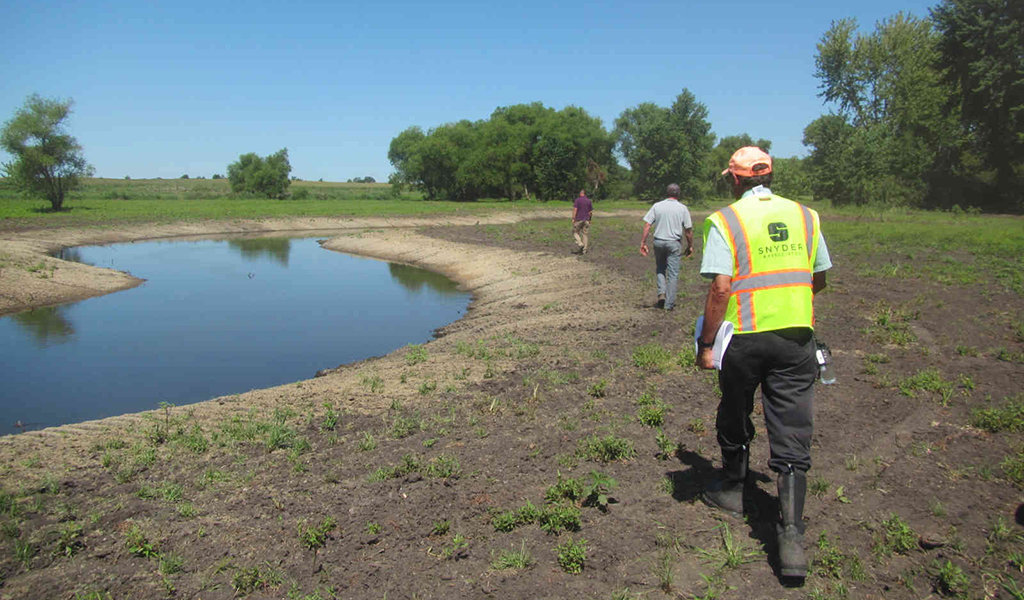 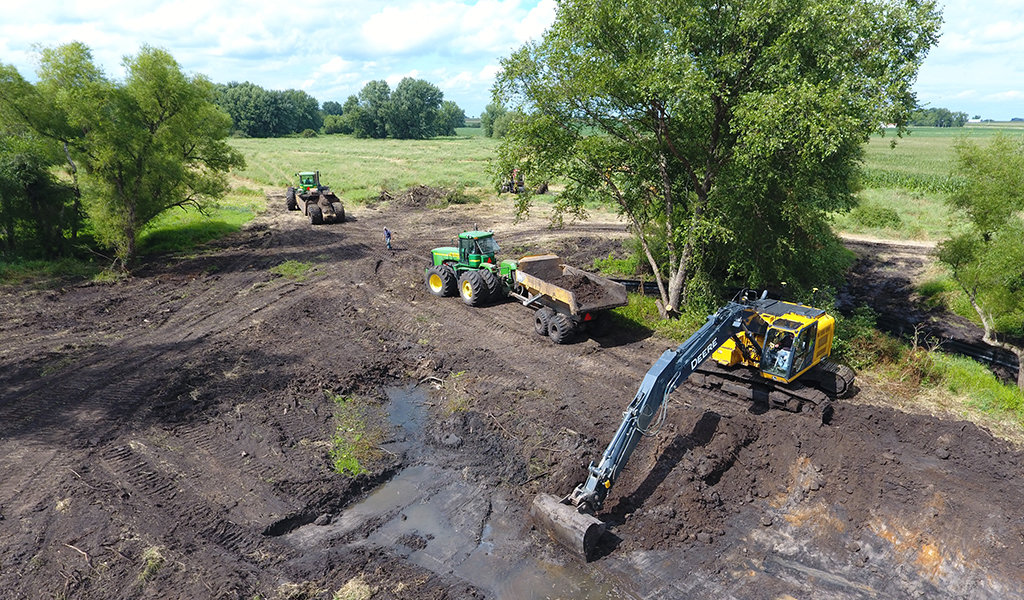 Stream Excavation
The stream renovations added over 1,000-linear-feet to the creek within the mitigation bank. 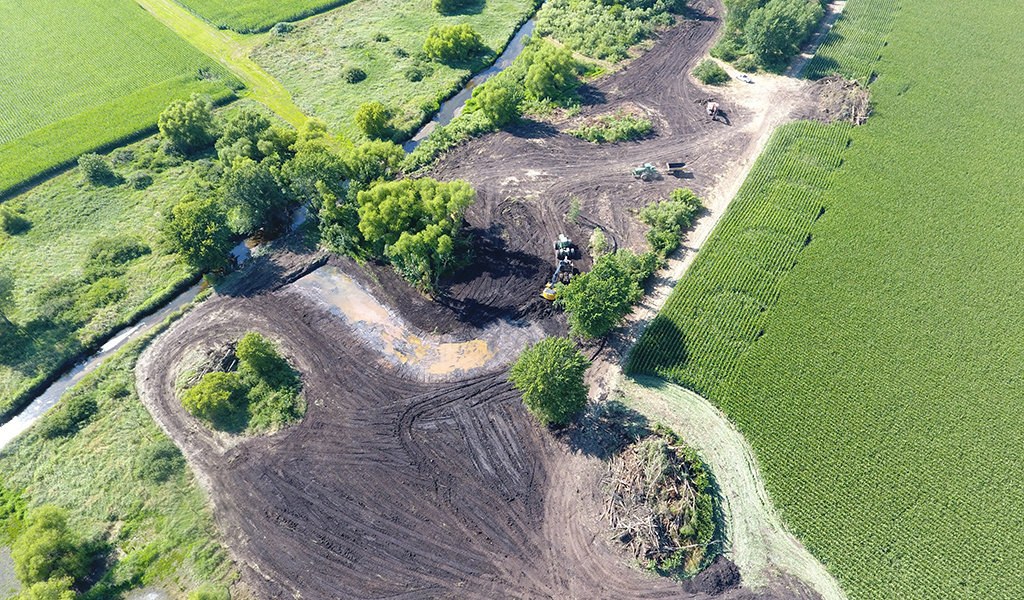 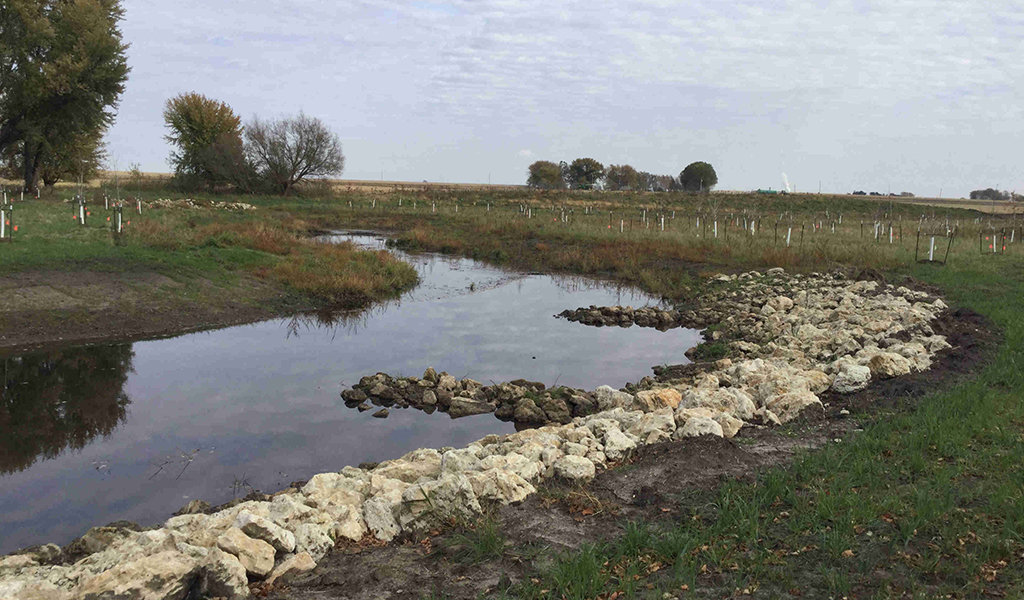 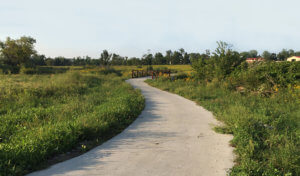 The Niebuhr family farm in Northeast Iowa contains a perennial stream called Buck Creek, bordered by fields that were historically used for cattle pasture. Over time, increased velocities through the straightened creek incised the channel and caused significant erosion. Additionally, once pasture practices were discontinued years ago, the floodplain surrounding the channel had overgrown with reed canarygrass. 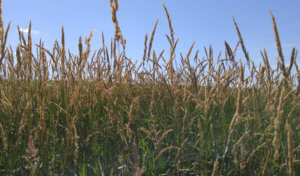 Reed canarygrass is an invasive species that can be detrimental to native habitats because it outcompetes native species with an intense rhizome complex as well as how tall and dense it grows.

The landowner was interested in restoring the property for future generations of the family to enjoy and to prevent further erosion of the creek. During their property restoration research, the property owners discovered the Section 404 mitigation banking process. Mitigation banking allows the owner of a restored stream or wetland (known as the Sponsor) to sell credits to developers whose projects are impacting regulated environmental resources in nearby watersheds. Achieving the status as a mitigation bank, however, involves a complex process that is best guided by qualified experts.

Consisting of approximately 35 acres of land, the Snyder & Associates environmental team provided information that allowed the landowner to better understand construction costs and revenue potential for the property to be considered as a stream mitigation bank. With the landowner’s approval to move forward, our team then worked together to help make this ambitious project a reality.

Well before site design and construction can begin on a project of this nature, our team starts working behind the scenes to meet regulatory requirements that will set the bank up for success. This includes creating a preliminary prospectus document and then a final agreement document called the Mitigation Bank Instrument (MBI). The MBI goes through an intense review and approval process with an Interagency Review Team (IRT) that may include the U.S. Army Corps of Engineers (USACE), the U.S. Environmental Protection Agency (EPA), the Department of Natural Resources, and/or other agencies. Construction plans, a conservation easement, and other documentation is included with the MBI to ensure the bank is properly built, maintained, and monitored.

The next phase in the transition to a mitigation bank requires the completion of a site assessment and historical data review. By understanding the area and its history, our environmental experts can determine if conditions are favorable for mitigation banking. Wetland mitigation banks need to sustain hydrology, develop hydric soils, and contain adequate conditions for hydrophytic wetland vegetation, while stream mitigation banks need adequate room for improvements within the channel, as well as along the riparian buffer.

In the case of the Niebuhr Stream Mitigation Bank, the historical data review turned out to be extremely informative as the original, meandering creek channel was difficult to see when walking in the field but was evident on historical aerial imagery. Several decades prior, the channel had been straightened to increase agricultural production. This straightening process, however, had also led to the erosion issues currently being experienced along the creek.

Even though the mitigation banking process would be creating new wetlands and improving the stream, determining the original path was important since there would also be a small loss of wetlands to “re-meander” the creek along its original alignment. By studying historical data in combination with the topographic survey, our team was able to determine that both forested and emergent wetlands were present within the original channel and could plan accordingly.

Once initial inspections were completed, planning and design for the proposed mitigation bank began. Consideration was given to re-meandering the creek along its decades-old, natural alignment. However, this option created concerns about the stream depositing an abundance of sediment, also referred to as aggradation, from the added length. Instead, our team determined the most effective route would be to create a new creek path constructing as much length as possible, while considering historic sinuosity and channel slope, within the property limits. This option also had the added benefit of maximizing stream credit potential for the Sponsor.

Our team utilized the EPA’s natural stream design checklist to ensure the new channel was appropriately designed. To form the new meandering channel, an area adjacent to the creek was cleared and excavated without being connected to the old channel. A bendway weir was created with rock keys to plug the old channel until the excavation was complete. The downstream end of the old channel was strategically left open to accommodate fish and invertebrate passage. New channel improvements included floodplain benches and bendway weirs. This updated creek alignment added approximately 1,100 linear feet of meandering channel, making the new creek just over 4,100 linear feet long overall.

Throughout construction, additional efforts were taken to improve water quality by incorporating shallow, vegetated slopes along the streambanks and placing excavated soils on the family’s adjacent farm field to create riparian buffers. During rain events, riparian buffers treat nutrients along agricultural fields before runoff flows overland into the creek.

Although the stream was the only area of the property designated for mitigation banking, the Sponsors also had the desire to restore the floodplain beyond the riparian buffer. To aid in this endeavor, and to assist in future monitoring and maintenance of the creek, three low-water crossings were installed along the new channel, providing access to all areas of the site. 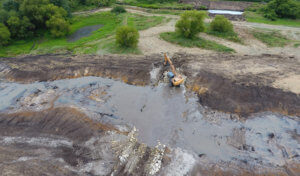 Additionally, the nearly 35-acre floodplain surrounding the old channel had been overgrown with reed canarygrass, an invasive monoculture species. Areas affected by invasives, or groups of a singular species, often see an upset in the natural balance of soils, as well as crowding out native species that are used by pollinators and promote a healthy ecosystem. To remedy this and increase biodiversity, the previously mentioned two-hundred-foot-wide riparian buffers were designed and seeded with diverse floodplain species along both sides of the stream. These buffers protect from sediment runoff during spring until adjacent row crops have a chance to establish annually.

To further enhance natural resources in an underused area along the creek, two shallow-water wetland habitats were created near the southwest property line. These features offer ducks and amphibians habitat, while also functioning as wetlands themselves, collecting and filtering runoff as well as increasing flood storage capacity.

Construction of the Niebuhr Stream Mitigation Bank was completed in the summer of 2020 and has remained in top condition thanks to continual monitoring. With an increase in funds available through the Bipartisan Infrastructure Law, many communities are moving forward with long-awaited development projects that will likely result in stream impacts throughout the state. The Niebuhr Stream Mitigation Bank has stream credits available for sale within the Cedar Service Area. Thanks to the work of our experienced environmental team, this valuable resource is available to aid your project’s need for mitigation.