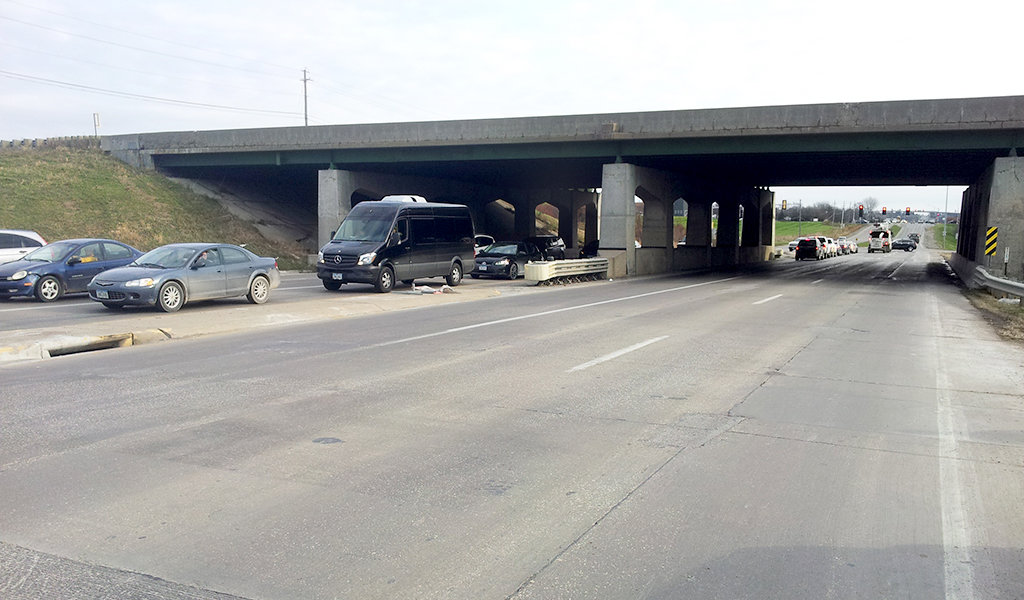 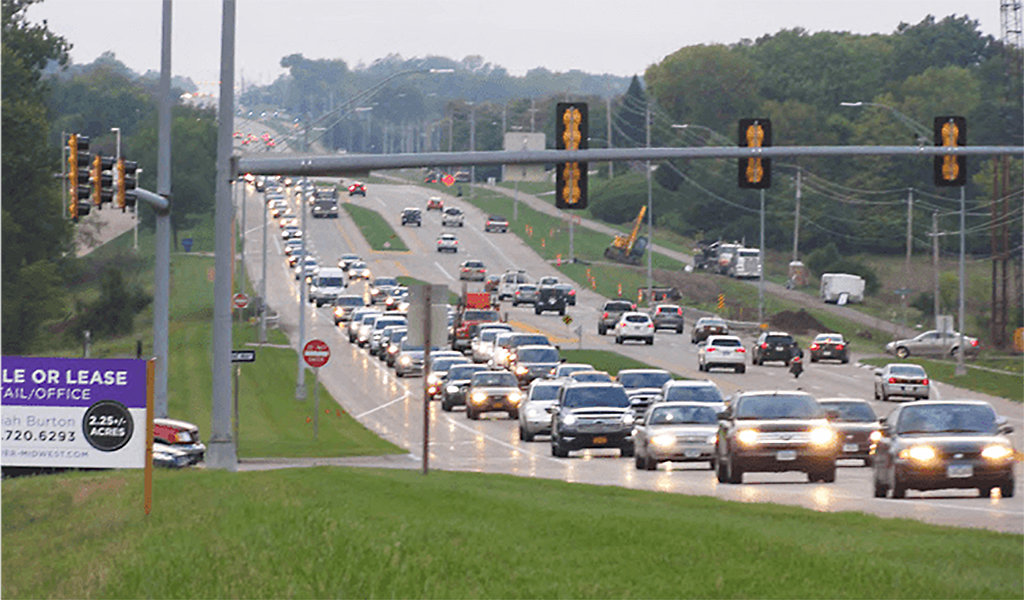 Rush Hour Congestion
Traffic to the west of the interchange becomes severely congested during peak periods. 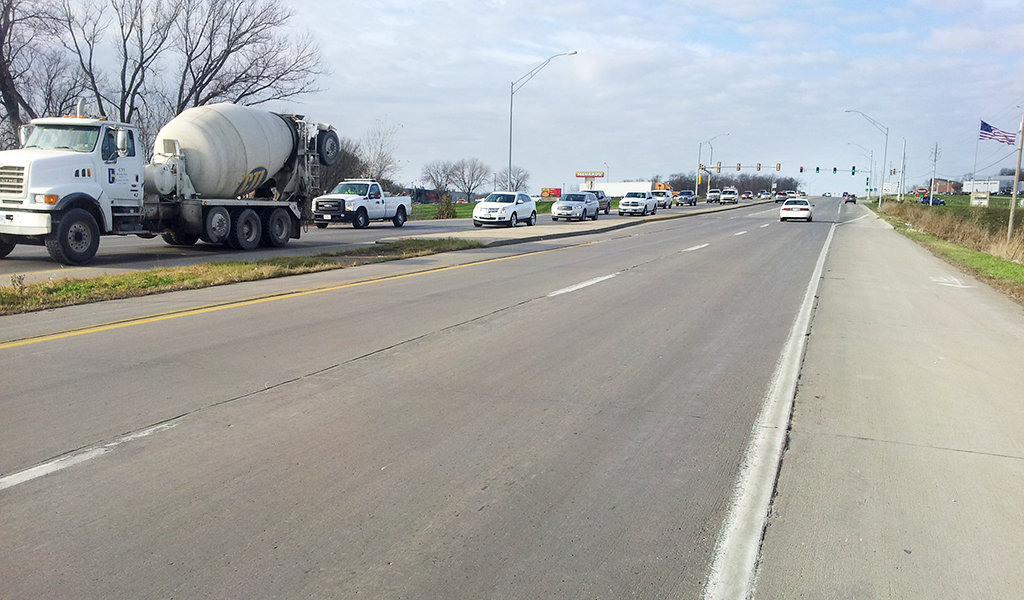 Many communities surrounding the Des Moines metro have experienced significant commercial and residential development over the past two decades. Nowhere has this expansion been more profound than in the western suburbs. The community of Waukee alone more than tripled its population between 2000 and 2020. Predictably, this meteoric growth has overwhelmed portions of the transportation infrastructure in the region leading to increased traffic congestion and crashes. 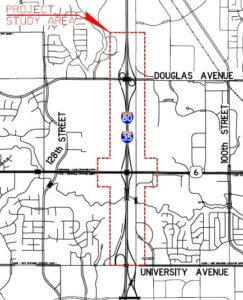 Map of the project study area.

In conjunction with the Iowa DOT, Snyder & Associates has been heavily involved with traffic and roadway improvements along this busy corridor for several decades. This long-standing relationship of exemplary design work and performing complex analyses led the DOT to again task our team with determining prudent interchange improvement options and creating an Interchange Justification Report (IJR) for presentation to the Federal Highway Administration.

Purpose of an Interchange Justification Report

When changes or improvements are proposed for any portion of the Interstate Highway System (including interchanges), the proposed improvements must satisfy the requirements established by the FHWA’s “Access to the Interstate System” publication.  The ultimate intent of the policies in this publication is to ensure the Interstate Highway System provides the highest level of safety and mobility to the traveling public. Adequate control of access is critical to ensuring these factors.

The FHWA publication contains eight specific requirements that new or revised access points must meet in order to receive approval for further development. These requirements, or “policy statements,” cover the full range of contingencies that need to be examined before options are presented to the FHWA for consideration. The IJR created by Snyder & Associates for the Iowa DOT carefully documents the eight policy statements and demonstrates how the proposed revisions at the I-35/80 & U.S. 6 service interchange and the modifications to ramps at the University and Douglas Avenue interchanges satisfy each requirement.

The I-35/80 & U.S. 6 interchange was originally constructed as part of the 1958 Interstate Highway project. After a complete reconstruction effort in the 1980s, it’s been largely untouched for more than four decades. In the intervening years, this basic diamond interchange began experiencing safety and capacity issues due to the large influx of residents commuting through the area. Also, due to recent enhancements to design standards, the interchange needs to be updated.

Additionally, several segments of I-35/80 and the approaches to intersections along U.S. 6 do not achieve operationally acceptable Levels of Service (LOS) with current traffic volumes. Similarly, when future 2022 or 2042 traffic volumes were analyzed, more interstate segments and intersections did not achieve acceptable LOS operations, even with a proposed widening of I-35/80 to eight lanes. Due to these factors, our team determined improvements are needed to the I-35/80 & U.S. 6 interchange.

The diverging diamond interchange was identified in the I-35/80 & U.S. 6 Alternative Screening Technical Memorandum as the preferred option and was carried forward into the IJR for the Ultimate Build analysis. Several modal solutions were considered throughout the IJR process, however, Snyder & Associates traffic engineers determined the diverging diamond option best fit the criteria initially outlined for the project. Ramp metering, High-Occupancy Vehicle (HOV) lanes, and other modal solutions were also explored. Though to provide enough benefit they would need to be implemented on a much larger scale and have only been considered in preliminary interchange layouts. 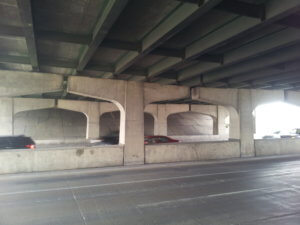 The vertical clearance underneath I-35/80 no longer meets current design standards.

Additional lanes were also considered on I-35/80 but as our team’s No Build analysis indicated, eight interstate lanes were not sufficient to achieve LOS C or better in the future analysis. To meet the Ultimate Build requirements, ten lanes were included in the improvements. This additional capacity along I-35/80, as well as replacing the I-35/80 bridges over U.S. 6 and increasing the southbound ramp distance to University Avenue addresses the safety and operational concerns identified in the study.

Targeted intersection improvements along U.S. 6 are designed to improve operations and safety, as well. A wider roadway and turn lanes at the 128th Street intersection just over ½ mile to the west of the I-35/80 interchange will greatly improve traffic movements leading to the interchange. Adaptive Signal Control Technology (ASCT) is also being implemented at several intersections to better coordinate signal timing along the corridor.

The DOT continues to move the Ultimate Build plan forward with a recent application submittal for a Surface Transportation Block Grant (STBG). They have further laid the groundwork for this project by performing an environmental study in the area in accordance with the National Environmental Policy Act (NEPA). When fully implemented, this expansive and wide-reaching construction project will create a safer and more efficient corridor surrounding the I-35/80 & U.S. 6 interchange.