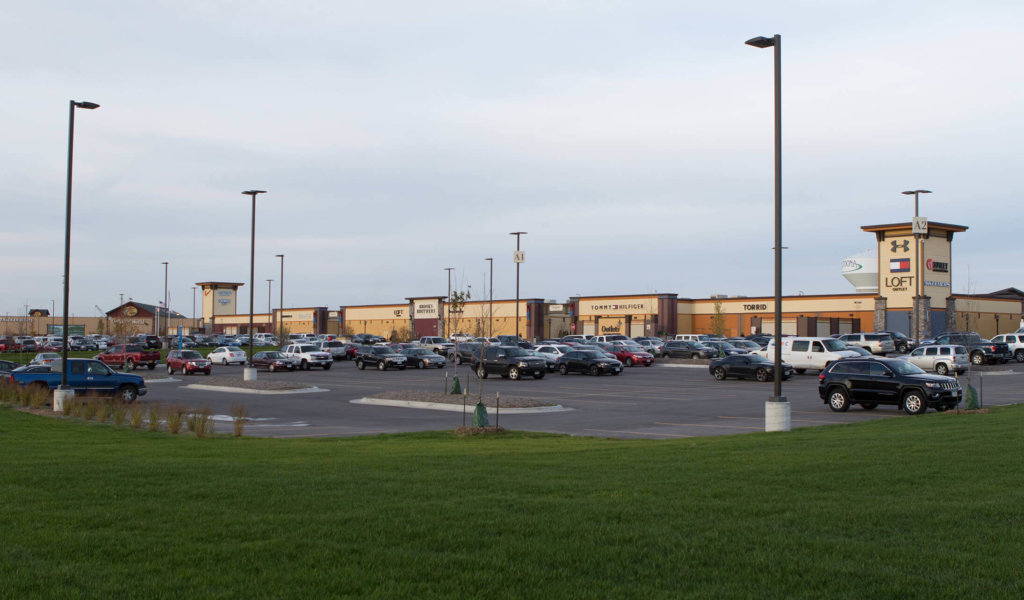 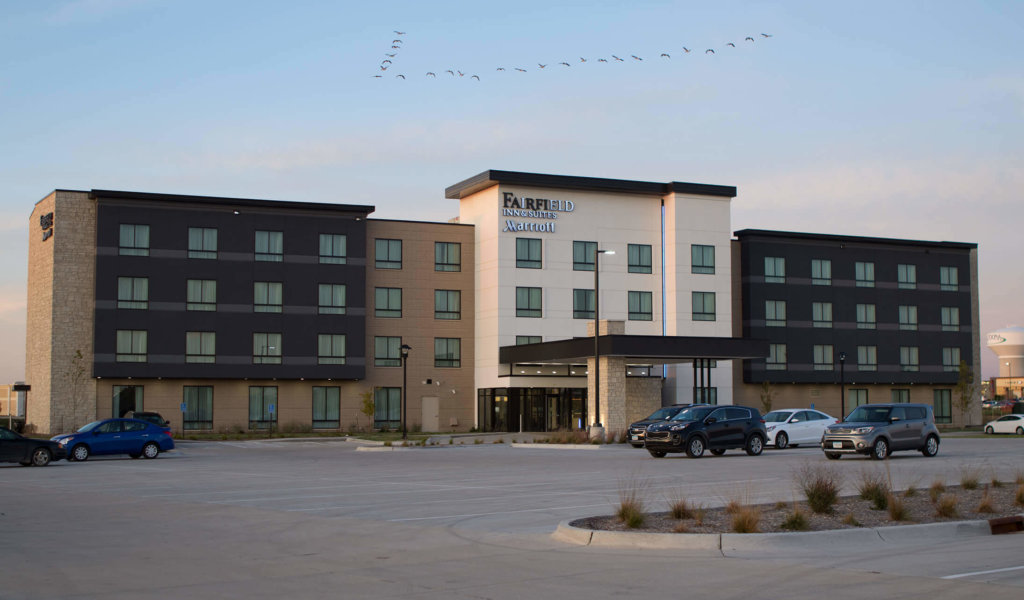 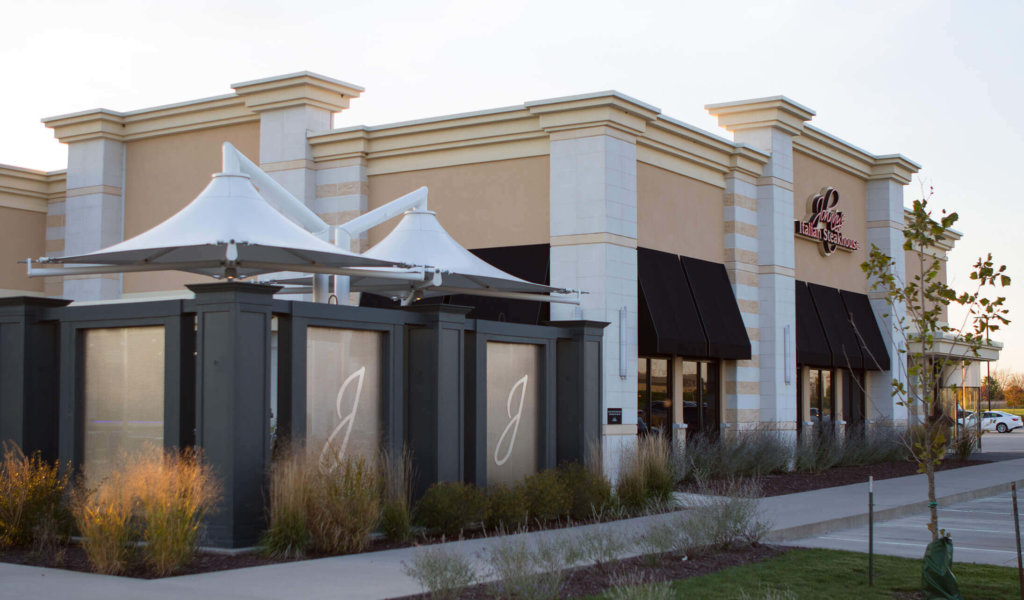 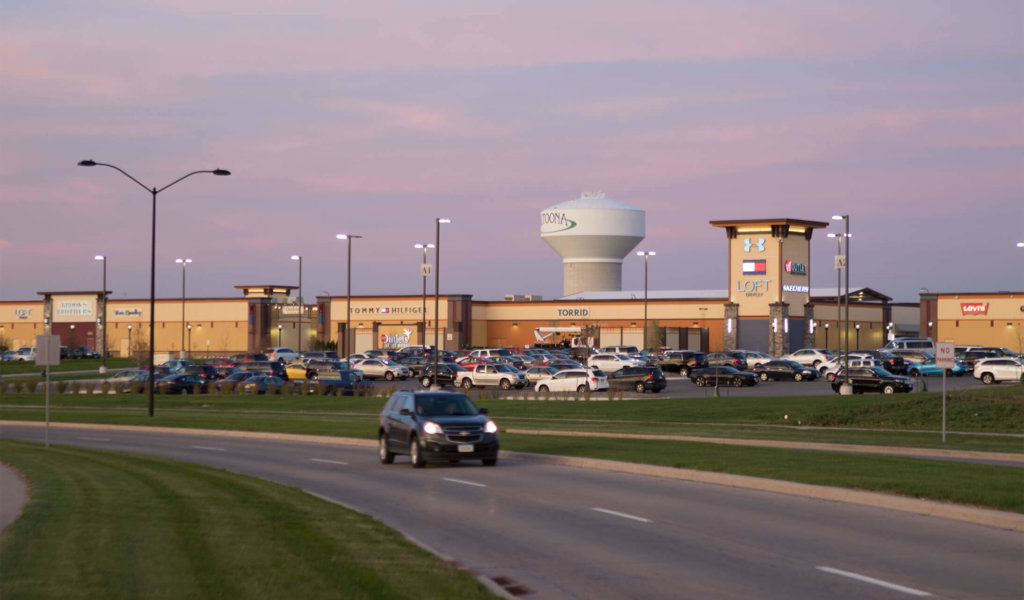 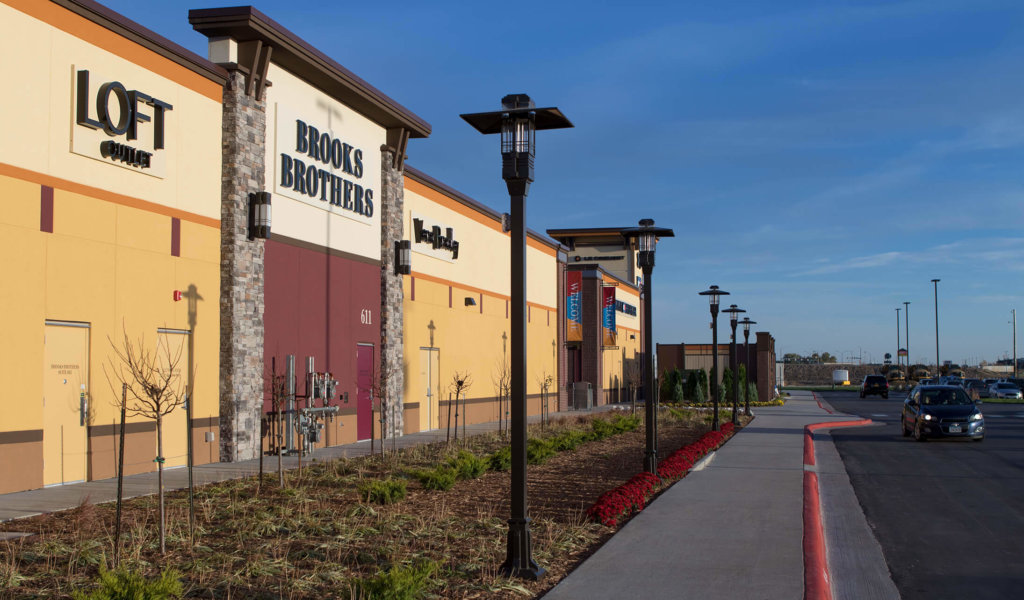 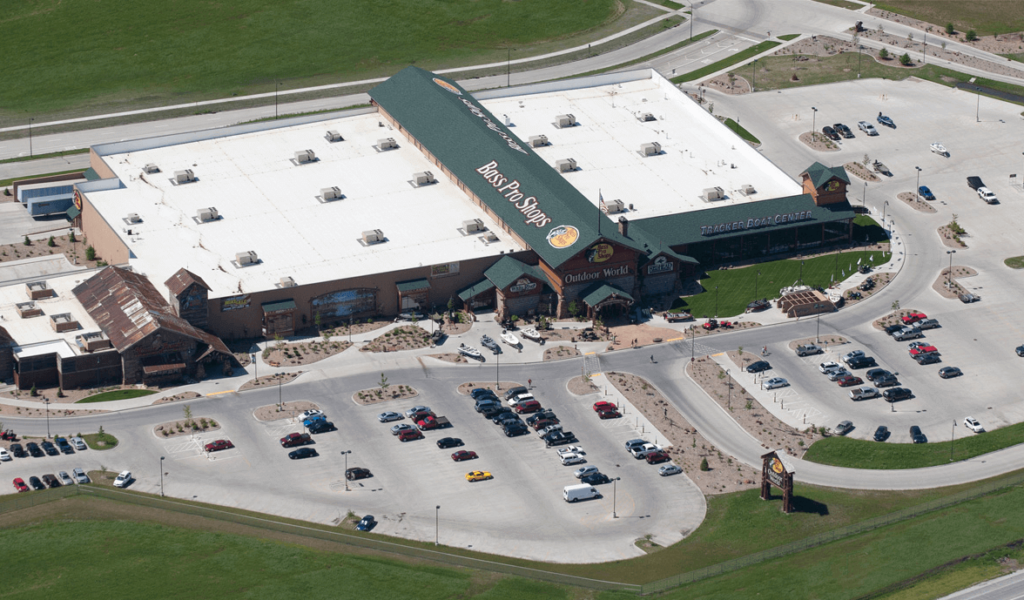 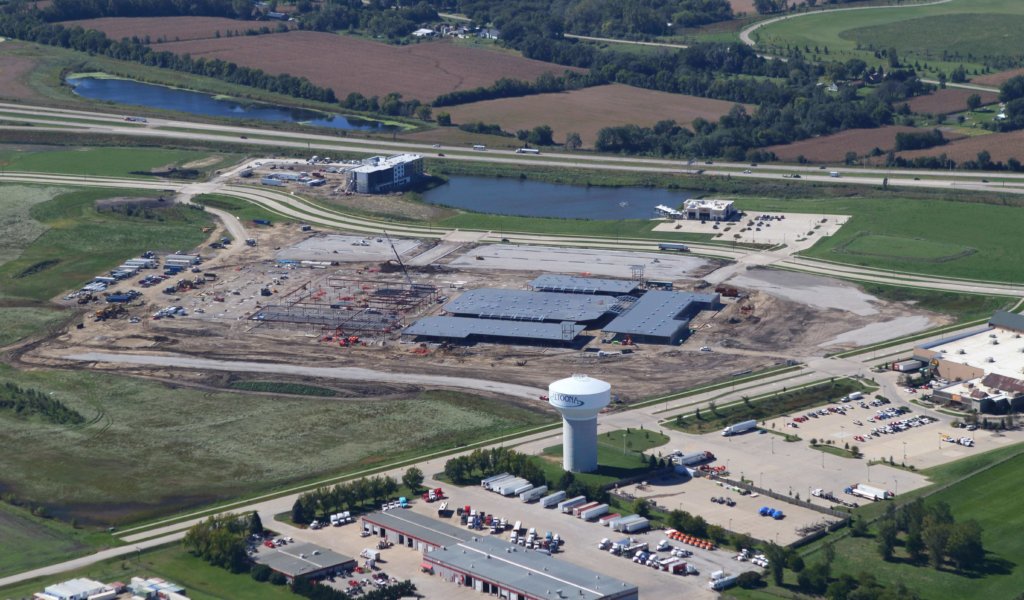 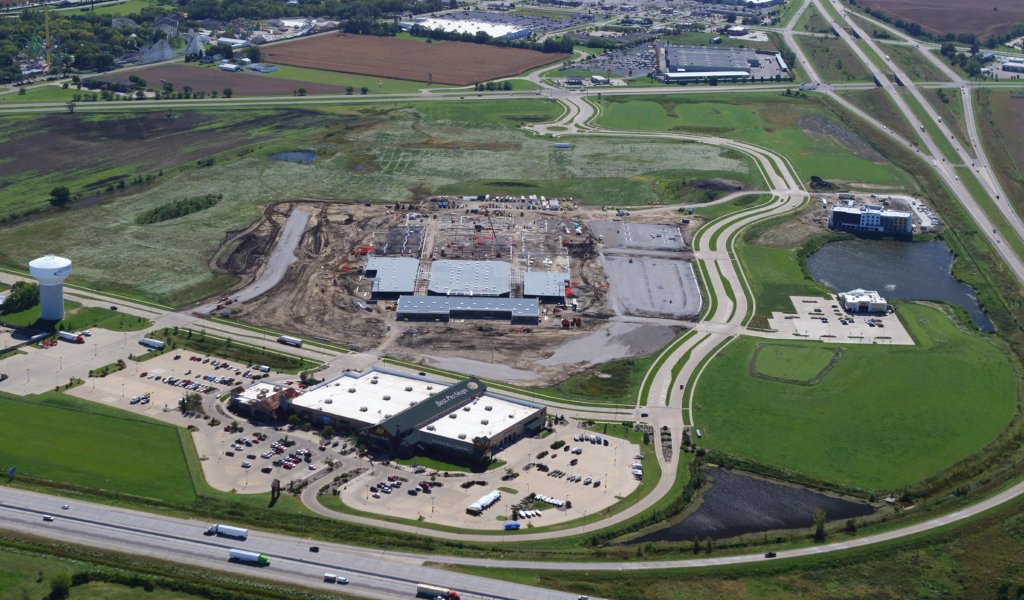 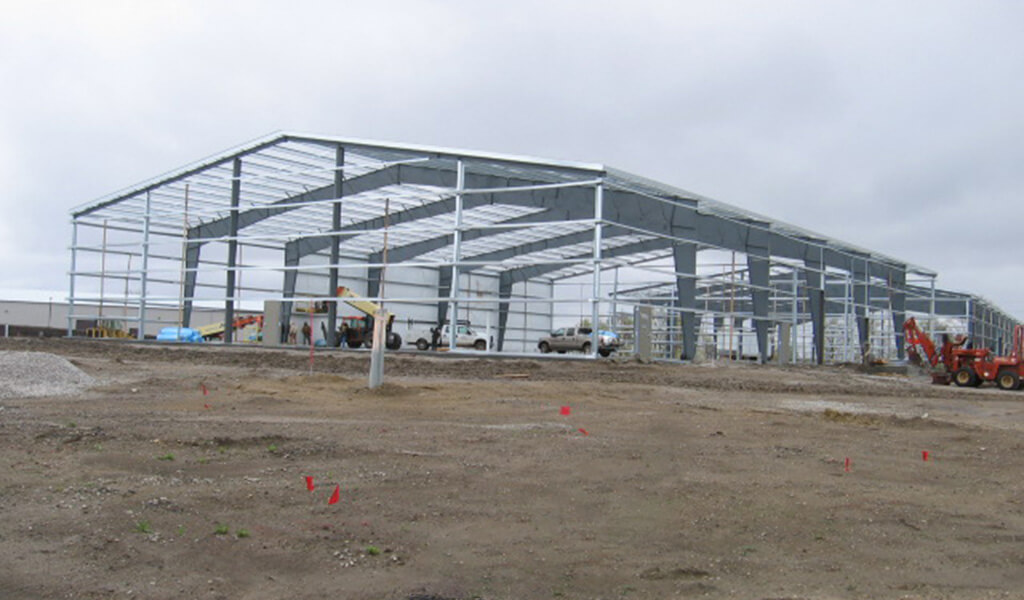 Snyder & Associates developed site concepts for the Shoppes at Prairie Crossing, a major 230-acre commercial/retail development at the intersection of Highway 65 and Interstate 80 in northwest Altoona, Iowa. Working with the developer, Heart of America, and the City of Altoona, our design team prepared an infrastructure plan to address public utility needs, transportation, and access control along with environmental and storm sewer management needs.

Prior to development, the area was used for agriculture. Due to the amount of organic soil in the area, soil mitigation and geotechnical work took place in order to prepare the site for development.

Construction began with infrastructure improvements in 2009 and concluded in 2010. Among the improvements was the construction of Bass Pro Drive and Adventureland Drive, along with a roundabout just north of Hubbell Avenue.

A stormwater pond creates a unique waterfront entertainment district for the area. The use of prairie style native plantings supports and enhances the overall theme of the development. To guide replication of native plantings throughout Prairie Crossing, Snyder & Associates 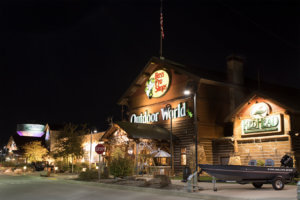 assisted the City of Altoona in creating the C7 landscape ordinance, a new section of their zoning code.

Based on our previous work for The Shoppes at Prairie Crossing, Snyder & Associates was brought on as the civil engineer and landscape architect for the Outlets of Des Moines. Located just south of the Bass Pro Shops Outdoor World, the Outlets of Des Moines is a 300,000-square-foot, open-air retail outlet with space for approximately 65 stores located on roughly 30 acres of land.

As the largest retail development in the city, coordination to establish the new Planned Unit Development (P.U.D.) was a central aspect of the project. In turn, Snyder & Associates completed a great deal of preliminary zoning work and assisted in the development of a Design Criteria Manual as part of the P.U.D.

Our development team collaborated with New England Development and the Heart of America Group to create concepts, public infrastructure design, utility design and coordination, platting and site development plans for the construction of the development and adjacent street. 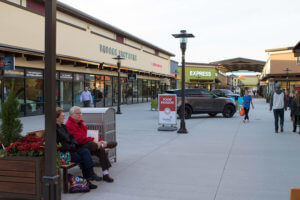 In keeping with the signature design and style of the Prairie Crossing development, the Outlets of Des Moines has prairie style architecture and landscaping. Amenities include Wi-Fi and food court charging stations, numerous seating areas, and an outdoor fireplace.

Construction began in June 2016 and concluded in fall 2017. On October 20, 2017, the mall opened to the public with a weekend-long grand opening event.

As the only major outlet center located within 80 miles, the Outlets of Des Moines is well-positioned to fill a void in the area’s commercial/retail market.