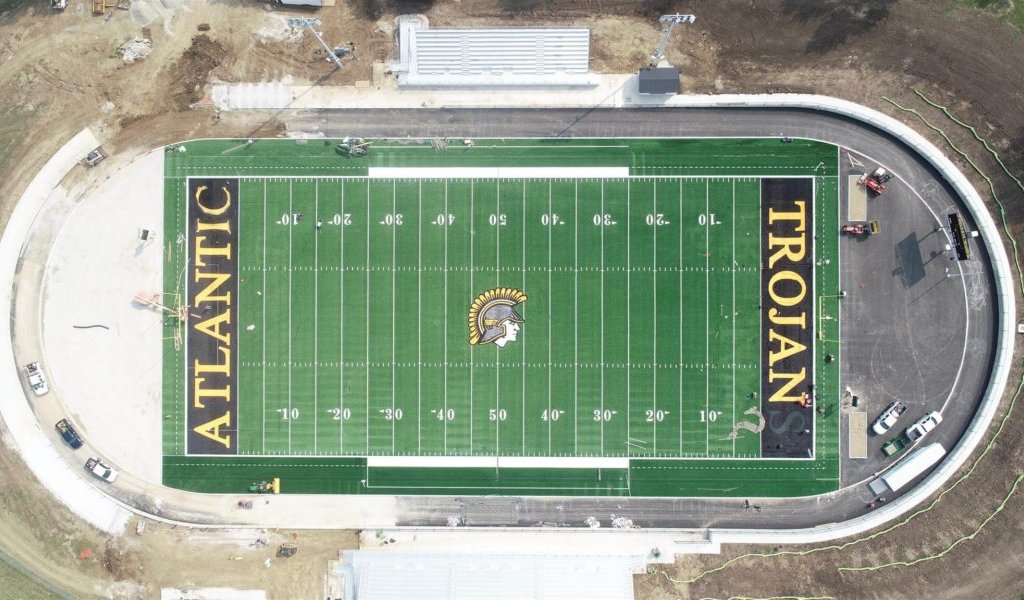 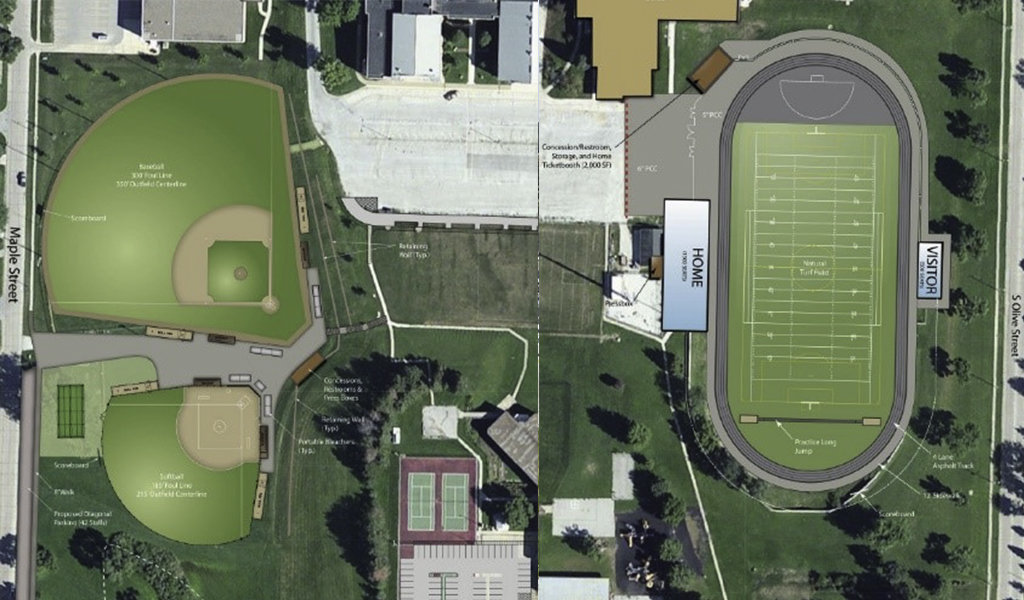 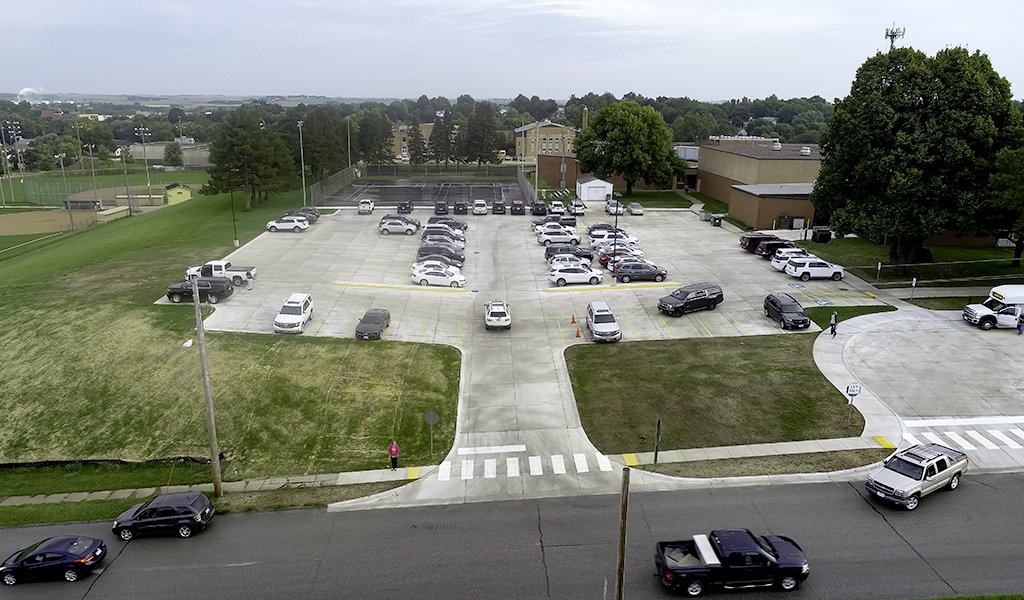 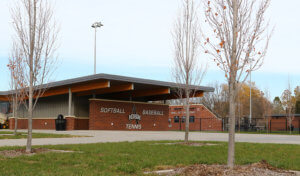 The Atlantic Community School District has high school sports venues at two different sites in town. Situated on the Atlantic High School grounds are an eight-lane track, a natural turf soccer field, and several practice fields. Located ½ mile west is a trio of schools that serve the preschool through 8th-grade students in Atlantic. Surrounding these schools is a baseball/softball complex, tennis courts, and the high school football stadium, historically known as the Trojan Bowl.

Numerous deficiencies and outdated facilities at several of these venues had the school district struggling to prioritize the necessary improvements. The natural turf field at the high school had deteriorated to an almost unusable condition after years of hosting soccer games, marching band and football practices. The accompanying bleachers were showing signs of age, as well, and in urgent need of replacement. Additionally, the area lacked much-needed amenities, such as a discus and shot put field.

Down the road at the other site, the baseball and softball fields had their unique problems. Both fields sloped drastically toward the outfields, dropping over five feet from home plate to the center-field fence. Inadequate drainage often made for sloppy field conditions and added to the general wear and tear. A lack of a central irrigation system, worn and outdated dugouts, and inadequate concessions rounded out the deficiencies that needed improvement.

Across the complex, the 125-year-old Trojan Bowl stadium needed a major overhaul. Enclosed on three sides by earthen berms, this facility lacked universal accessibility, standard safety features, and all-weather play capabilities. Much like the baseball and softball fields, the playing area was uneven, worn, and lacked proper drainage. Inadequate space along the sidelines created a safety hazard for players and coaching staff on and off the field.

The field itself was surrounded by a cinder track that became a muddy mess during rainy weather. This would quickly become a headache for fans, cheerleaders, and band members trying to navigate the stadium. Emergency stand-by vehicles were also unable to access the field during these wet conditions. Undersized concession areas meant long wait times for the fans and portable restroom facilities were an unwelcome sight.

The Atlantic Community School District reached out to Snyder & Associates for help in prioritizing, designing, and budgeting for their athletic field improvements. The experts at Snyder & Associates have years of experience in the natural and synthetic turf playing surfaces arena as well as facilities design. In partnership with West Des Moines-based FRK Architects, the team initially prepared a preliminary design, along with programming and construction budget estimates. This allowed the school district to organize a promotional campaign and public bond referendum request.

After the successful passing of the bond referendum, the team started on the next phase of the project. They worked with the school district to perform a site analysis, obtain soil samples, design a facility master plan, prioritize projects, assist with construction budgeting, and create a manageable renovation plan. Extensive coordination between the school district, community athletic leagues, local clubs, and other stakeholders helped ensure the community’s diverse needs would be met with the targeted improvements. 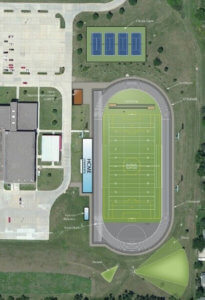 This design rendering shows the upgrades planned for the high school location.

With a master plan in place, construction and renovation efforts began in earnest in the fall of 2019. At the high school location, an oversized soccer field design allows for the flexibility of field markings to accommodate a wide variety of sporting events. An all-weather, synthetic-turf playing surface means less downtime after inclement weather and requires less maintenance. The eight-lane competition track around the soccer field was resurfaced to provide many more years of service. And new shot put and discus fields were added just south of the track, while new bleachers are designed to meet all ADA requirements.

Also at the high school, four new tennis courts are scheduled for construction north of the track. These new courts, located close to where they’re needed, allows the tennis courts at the other site to be replaced with much-needed parking for Washington Elementary School. A newly expanded concession stand rounds out the renovations for the high school location.

Over at the other sports venues, the baseball and softball complex is slated for a host of upgrades. Extensive grading efforts will level the playing surface of both fields. To address the maintenance challenges, a fully-integrated and centrally controlled irrigation system is designed to care for the new turfgrass mixes being introduced, while also helping to reduce water usage. An elaborate drainage system slated for installation will allow the natural turf to recover faster between athletic events, increasing the playability of the fields.

Spectators and players alike will benefit from the other complex improvements. Wrap-around bleachers, improved fencing, expanded concession space, and a new concrete concourse area between the fields completes the fan amenities. For the players, new batting cages and dugouts will improve player training and enhance the game-time experience. A new press box to serve both fields is also in the offing.

At the Trojan Bowl facility, the design team created more sideline space by improving the grading and removing several lanes from the non-competition track. The field was leveled and the slopes of the earthen berms were shallowed in preparation for the weather-resistant synthetic turf installation. Much like the soccer field at the high school, the new turf means more time on the field for practice, fewer canceled games due to soggy conditions, and lower maintenance costs for the district. Additionally, athletes will benefit from the addition of a four-lane rubber fitness track.

Numerous paved walkways were also integrated into the plan. These lead spectators to the new concession stand, expanded restrooms, and the new ADA compliant, 2,000-seat bleachers (1,500 for the home team fans and 500 for the visiting fans). A new scoreboard, lighting, and sound system will further enhance the fan experience. A centrally-located maintenance building was also incorporated into the plan to provide convenient access to equipment and further reduce upkeep time and costs.

When these upgrades are fully implemented (substantial completion is targeted for the fall of 2020) thousands of citizens, fans, and players will benefit from these well-planned and easily accessible athletic venues. The professionals at Snyder & Associates harnessed their years of experience in designing sports facilities and installing synthetic turf systems to help create these cutting edge sports complexes that will serve the Atlantic Schools well for years to come.