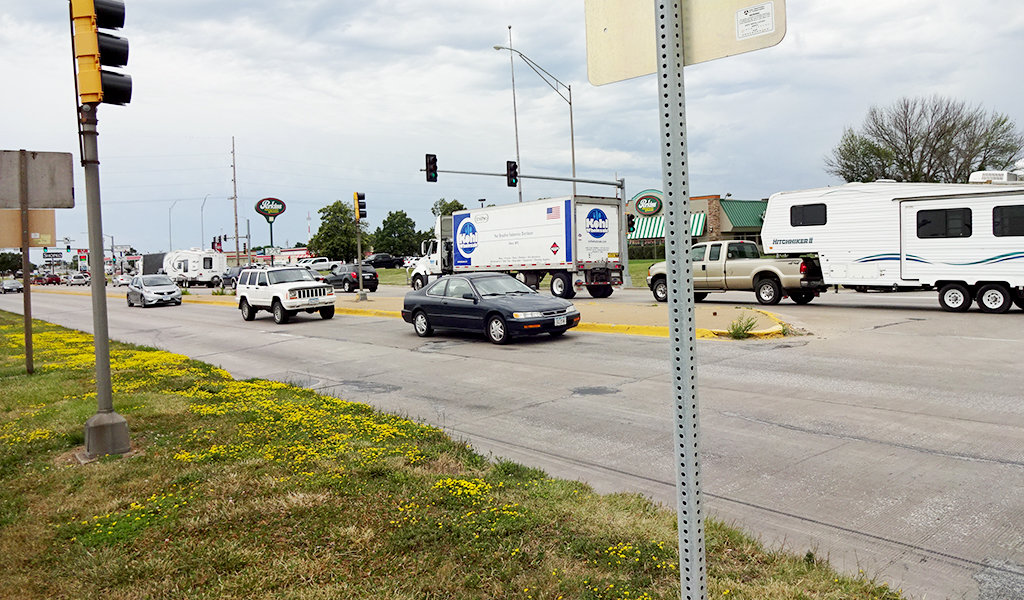 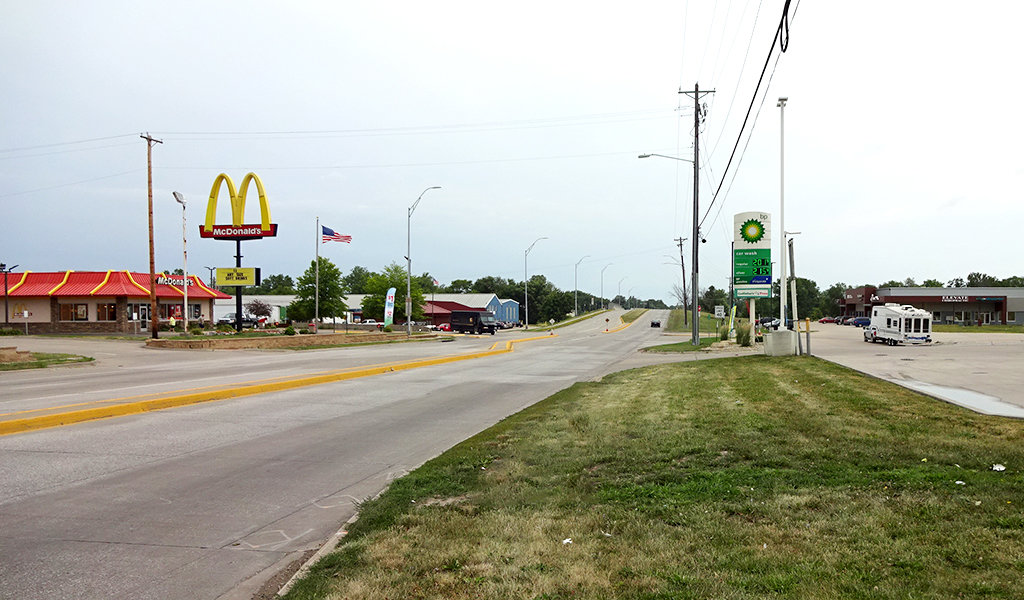 Controlled-Access, Divided Roadway
Looking north from the Mt. Pleasant Street intersection, a lack of sidewalks is evident along the corridor. 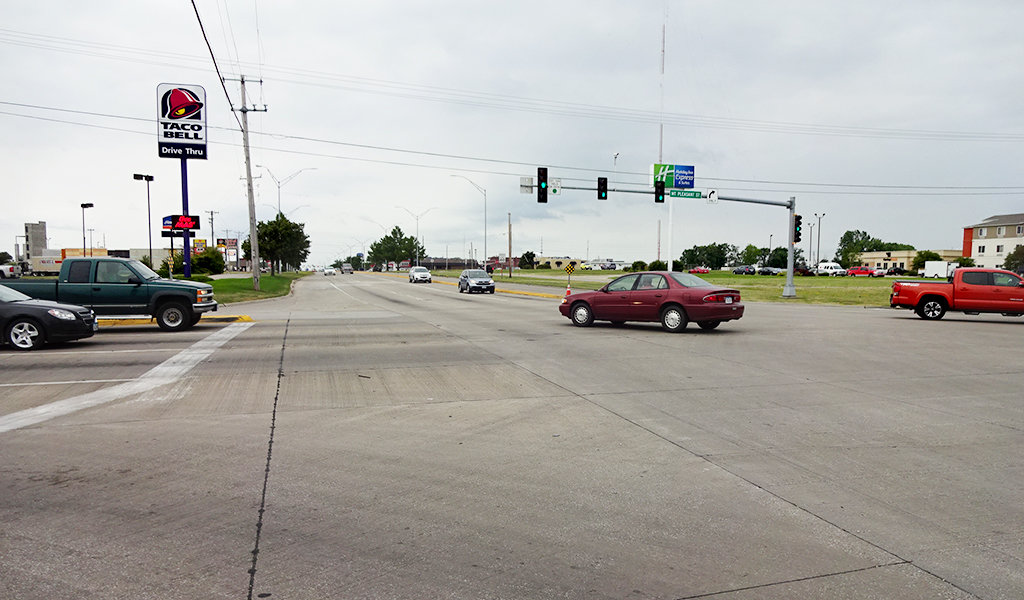 Stretching over 1,400 miles from Louisiana to Minnesota, U.S. Highway 61 (U.S. 61) is a major north/south route bisecting the middle of the country. A nearly four-mile-long section of the highway runs directly through the community of Burlington, Iowa in the southeast corner of the state. As a primary contributor to the community’s success, the Iowa Department of Transportation (DOT) tasked the traffic professionals with Snyder & Associates to conduct a traffic study along this busy corridor.

The study corridor spanned from Burlington’s southern to its northern corporate limits. The study was initiated to evaluate this busy corridor’s safety and operations as they currently exist and looking forward twenty years. This comprehensive study included the evaluation of the corridor’s traffic and crash history, intersection signal timings, traffic operations, multimodal accommodations, access control needs, and potential frontage road conflicts. Additionally, the study identified both short- and long-term improvements that could be implemented to improve safety and operations, as well as maximize the travel flow efficiency and useful life of the corridor. This effort is further propelled by the Iowa DOT’s significant investment in other portions of the corridor throughout southeast Iowa.

Throughout the majority of the study area, U.S. 61 is currently configured as a four-lane divided roadway. It’s approximately 64-feet wide in total with 12-foot wide lanes and a 16-foot wide median. Frontage roads to the east and west of U.S. 61 throughout most of the corridor are positioned at varying distances from the main roadway. There are 13 intersections with public roadways along the corridor, ten of which are signalized. The remaining intersections are two-way STOP-controlled (TWSC) for the minor side street approaches. 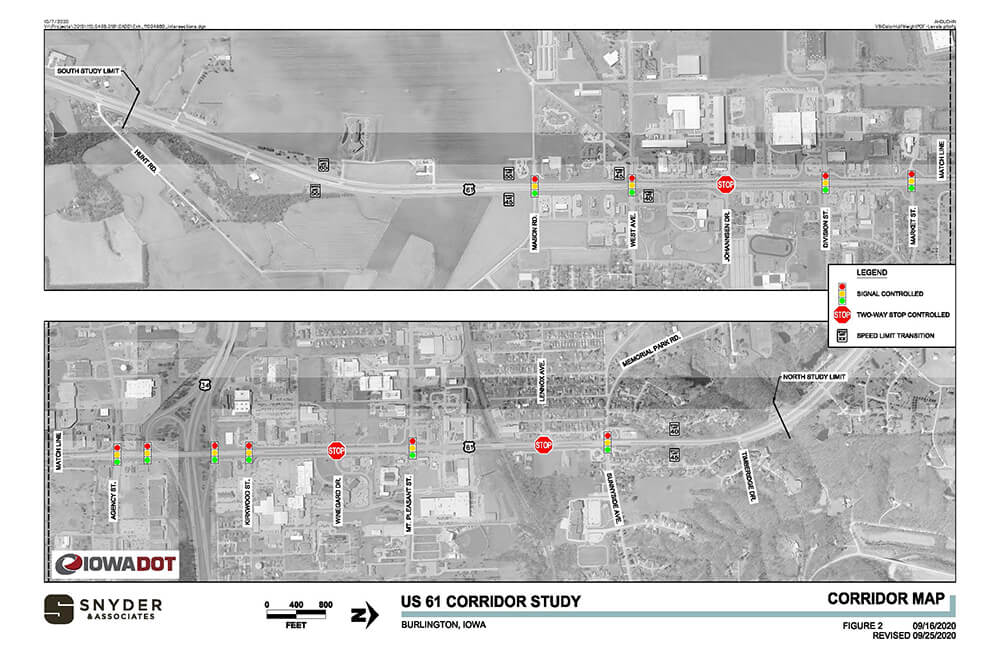 In general, there is strong access control along this stretch of U.S. 61 with few full-access driveways and significant distance between most intersections. Left turn lanes are provided for all of the study intersections on U.S. 61, with right turn lanes at several intersections. The mature land use and frontage road type design does lack consistent pedestrian and bicycle infrastructure in the study area. The only extended stretch of sidewalk along the corridor is an approximately one-half mile section located on the west side of U.S. 61 between Sunnyside Avenue and Mt. Pleasant Street.

To evaluate existing operations, future traffic demand under existing conditions and future demand with improvements, Highway Capacity Manual analysis techniques were modeled throughout the corridor. In general, traffic operations were found to be at an acceptable Level of Service (LOS) along the entire corridor for both the existing volumes and the forecasted volumes. For the existing volumes, all intersections currently operate at LOS C, or better overall with some approaches at LOS D. For the forecasted volumes, all intersections operate at LOS D, or better with some approaches at LOS E.

There were a number of locations where the current and forecasted data showed queue lengths exceeding the recommended storage length. Overall, however, the corridor is expected to operate acceptably at all signalized intersections through the study design year of 2040 with LOS C or better by implementing our team’s recommended improvements.

Although the corridor currently provides a satisfactory LOS, a few key areas were recommended for improvements to reduce crashes and improve operations of vehicle traffic flow, as well as the mobility options for pedestrians. General upgrades to the traffic signal system currently ready for construction will benefit traffic signal operations, time-of-day left-turn phasing, monitoring, and progressive flow. These improvements will also contribute to a reduction of left-turn/broadside collisions and rear-end collisions. The lengthening of specific turn lanes along the corridor, as well as other additions at identified intersections, were also included in our team’s recommendations. 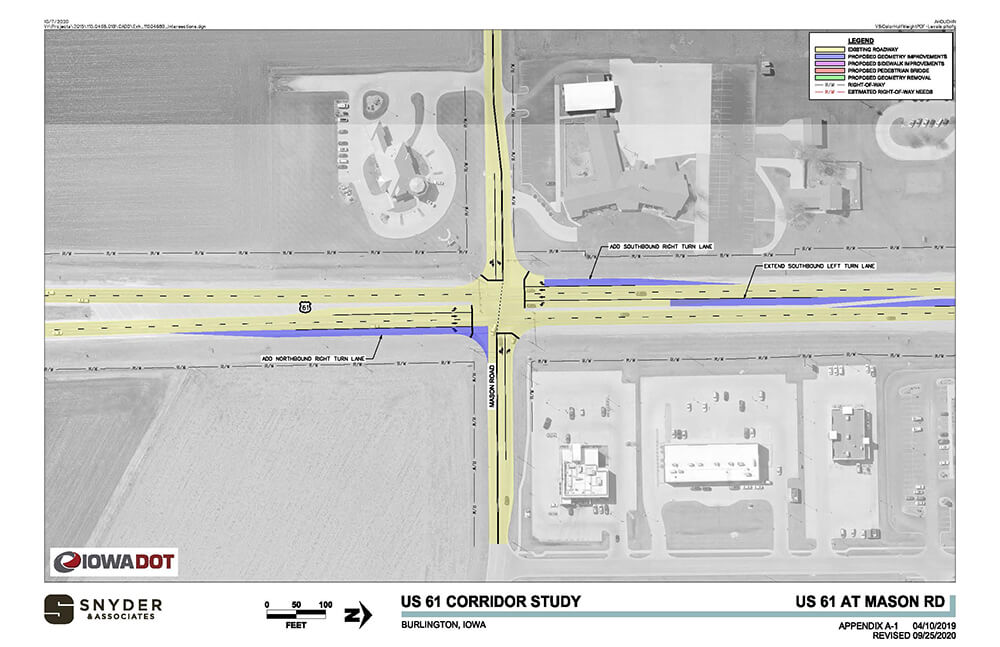 Potential interchange ramp improvements include removing the southbound loop ramp to eastbound U.S. Highway 34 (U.S. 34) and the relocation of the eastbound U.S. 34 exit ramp. These upgrades will provide improved intersection spacing at one of the busiest locations adjacent to the Agency Street intersection. The geometric improvements will also improve safety and operations in the corridor well into the future.

Additionally, a key pedestrian mobility consideration would be the inclusion of a crossing of U.S. 34 with a separate pedestrian bridge structure or the widening of the existing bridge. Further development of the sidewalk network throughout the entire corridor would add multimodal accommodations that don’t currently exist.

As previously mentioned, access management is well controlled along the corridor. However, some opportunities may present themselves to the City of Burlington as vacant parcels are redeveloped in the future. This occurrence could facilitate some changes in frontage road alignment or a shift to backage roads for improved intersection operations.

As the City of Burlington continues to focus on corridor improvements, the benefits for drivers will continue to grow in the form of reduced travel times, less pollution, and safer commutes. The Snyder & Associates team will likewise continue to assist the city and the Iowa DOT in their efforts to create a better quality of life for residents, support new development, and improve safety, efficiency, and traffic flow well into the future.